By Hoard's Dairyman staff   @hoardsdairyman
Last Tuesday, the Hoard Jersey herd which now numbers 147 cows was appraised by AJCA appraiser, Leah Johnson. We purchased the Jerseys from three Wisconsin herds, one Illinois herd, and one in Ohio. Most Jerseys are housed in our old tie stall barn that recently made a complete transformation into a free stall facility; a few dozen can be found in the new free stall barn, as well. The old tie stall barn is scraped twice a day with a skid loader, and cows are fed outside with drive-by feeding. The Jerseys make their way to our 3-year-old parlor three times a day to get milked. 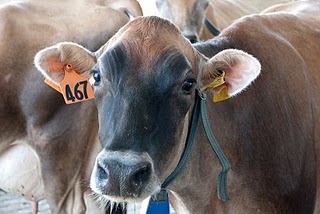 When we were done, the American Jersey Cattle Association put scores on 68 head. The entire group averaging 2.25 lactations averaged 80.97 points which is up 0.7 of a point from our June score. That average included the 79 cows that previously were scored in the current lactation and did not change in score. When looking at the herd by lactation number, we had:

Overall, the second-lactation group was two full points from our first score. And that was with 42 more cows in the group. Our second-lactation average score is one point over breed average.

Outside looking in
HD Notebook
Related to:
HDN, HDFarm
In HD Notebook

Back to the basics
By Hoard's Dairyman staff