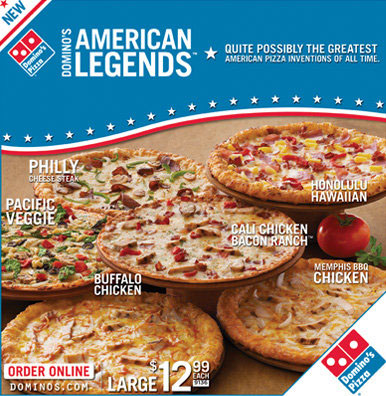 Brandon Solano became Vice-President, Marketing and Innovation with Domino's Pizza in early 2008. (He is now Vice President, Development.) That occurred at the same time that the 2008 financial crisis hit. All consumer sales were off. Domino's was having a bad year, as was the entire pizza category. It was time for a new plan.

"Our food did not taste good enough," said Solano. "As a team, we questioned everything we did in the past. Many in our company thought we were in the service business. We had to remind ourselves we are in the food business," commented Solano.

"As we looked at our future, there were two choices: cost-save your way there or make great food," he noted. "We know consumers like pizza with a lot of cheese. So we decided to make better pizza."

So, in late 2008, Domino's entered a strategic partnership with Dairy Management, Inc., (DMI) the dairy-producer funded check-off and promotion program. Christina McDermott headed up the partnership from the DMI side. Together, Solano and McDermott's teams researched new ways to grow the important pizza category which accounts for 25 to 28 percent of all cheese consumption nationally.

Customers responded with purchases by growing Domino's pizza sales by 14.3 percent in the spring of 2010. Overall, the chain used 29 million more pounds of cheese throughout 2010. Solano says 2011 will be another strong year. The growth in pizza sales has encouraged other pizza chains to follow Domino's lead.

Domino's and DMI are betting on the same outcome with recent work on cheesy bread. At this week's DMI annual meeting in San Diego, Calif., Domino's is soft launching a new stuffed cheesy bread.

"It features 150 percent more cheese than our current cheese bread. It has as much cheese as a medium pizza," says Solano. "It has more cheese in the center and on top," noted the Domino's development leader.

When the product hits Domino's chains, consumers will have three options: cheese only, jalapeno bacon, and spinach and feta.

Solano is hoping for big results from the most recent venture. As for the partnership with the dairy producer funded DMI, "I consider them an extension of my team. Working with them is seamless," says Solano.

Always our own worst enemy
By Hoard's Dairyman staff