Classification provides 29 Guernsey 2-year-olds at the Hoard's Dairyman Farm with their first score.

By Hoard's Dairyman staff   @hoardsdairyman
The Guernsey 2-year-olds at the Hoard's Dairyman Farm, managed by Jason Yurs, are looking better than ever and it was evident during their most recent classification on May 21, 2012. 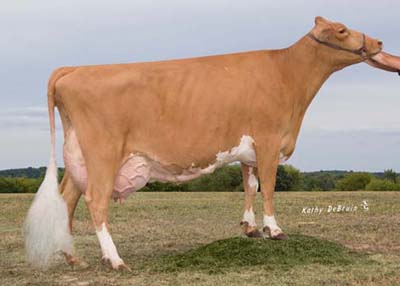 Of the 74 Guernseys scored by classifier Brian Schnebly, 29 were 2-year-olds receiving their first score. The highest final score from this group was an VG-87, with 83 points for both her mammary system and feet and legs. The 29 newly scored Guernseys fell into one of two classification brackets with:
· 18 Very Good
· 11 Desirable

More than a buzzword
HD Notebook
Related to:
HDN, HDFarm
In HD Notebook

Use your background to make a difference
By Hoard's Dairyman staff