Your ability to hear is a onetime deal. Once it's gone, it isn't coming back.

Engines. Vacuum pumps. Animals. Motorized shop tools. What do they all have in common? They are found on dairy farms . . . and they can be loud. And over time, they can all contribute to hearing loss. 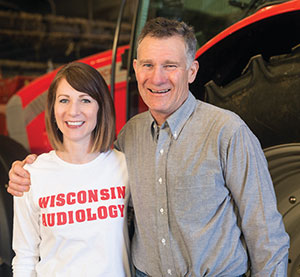 At right, Hearing is a gift, but as dairy producers we engage in a number of situations each day that put our hearing at risk. One University of Wisconsin researcher and former farm kid is spreading her hearing protection message one pair of earplugs at a time.

Many of us know farmers who often ask you to repeat yourself, louder. Many of us find ourselves saying "what?" when someone asks us a question. We may contribute it to growing older, but being exposed to many of the loud sounds on a farm can gradually damage hearing, and when it's gone, it's not coming back.

Melanie Buhr-Lawler wants to spread the word about hearing loss . . . one pair of earplugs at a time. As a clinical associate professor and audiologist at the University of Wisconsin, and a former farm kid, she is well aware of the "horsepower versus hearing" connection.

For the last two years, she has given out free earplugs at the Budweiser Dairyland Super National Truck and Tractor Pull in Tomah, Wis. In 2014, she and her outreach team handed out 2,000 pairs of earplugs to attendees; this past June they passed out 4,500 pairs.

"We wanted to make people aware of the risks of horsepower . . . and a tractor pull can be one of the loudest places to be," she said. "The sound levels at that event alone can damage hearing."

Melanie and her team weren't there to lecture but to be positive and share how hearing loss could be prevented. She said some of the attendees had brought their own hearing protection, but many did not, including kids.

"Giving out earplugs as well as a little information can, hopefully, encourage healthy hearing habits," she said. "It's never too late to protect what you have left."

According to Melanie, farming is an industry that doesn't always have mandated safety coverage.

"A noisy environment is accepted as part of the experience and the culture," she said. "Career-induced hearing loss is actually preventable, if you take measures early and often."

Sound is measured in decibels. A whisper measures 30 decibels, and a normal conversation is 60 decibels. Hearing protection is recommended when someone is exposed to noises at or above 85 decibels for a prolonged period of time.

The softest sound that healthy ears can hear is 0 decibels - near total silence. Prolonged exposure to any noise at or above 85 decibels can cause gradual hearing loss. Too much noise gradually damages tiny sensory cells in your inner ear. The damage may not be noticeable at first, but once it occurs, the hearing loss is permanent.

One pair at a time

This year's outreach project at the Tomah tractor pull involved passing out free earplugs, testing the sound levels of the event and a mini-sound booth for hearing tests.

Melanie received a grant from the Ira and Ineva Reilly Baldwin Wisconsin Idea Endowment which allowed them to expand their efforts in 2015.

"Everything was very well received," she said. "But the sound booth didn't work so well for the hearing tests; the event was just too loud."

"I asked him how he thought I could reach a large group of people who were exposed to loud noises, and he suggested the tractor pull," she said. "While many of the attendees are farmers themselves, there are also a lot of people who enjoy outdoor activities that may include loud noises and run the risk of hearing loss."

For a farmer, Melanie said her dad has "remarkably good" hearing, but she credits part of that to bugging him about wearing ear protection when she started studying audiology about 15 years ago. As a child, she remembers mowing the lawn wearing headphones to block out the noise . . . then cranking the music up to be heard over the mower.

Baling hay, picking rocks, working near a loud tractor - she said as a child she didn't even think about the noise. "It was part of the culture - machines were loud, and people had to shout to be heard over them," she said.

After graduate school, she began seeing patients clinically that had suffered hearing loss and realized many of them worked on farms. After moving back to Wisconsin, she renewed her interest in working with people in rural areas.

Many of the things we all enjoy can be loud, she said, including music, concerts, riding ATVs, tractor pulls or motorcycles. "I just want to spread the word to have fun and enjoy these activities, but use the tools available to stay safe and save your hearing," Melanie said.

She added that the easiest way farmers and youth can protect their hearing is to wear "over-the-counter" hearing protection, such as disposable earplugs and/or earmuffs. They can purchase those through a farm supply store or catalog, online, or even at a pharmacy or big-box store like Target or Walmart.

In both her teaching and her clinical work, Melanie said she is always thinking about outreach projects. "I feel passionate about it," she said. "Farming is not necessarily always a quiet and peaceful lifestyle, but we can take steps to make it a little less dangerous to our hearing."

The randomness of reproduction
Reproduction E-Source
Related to:
features, farm safety
In Features