Even at the end of his dairying days, Jeff Corle’s passion for farming set to tune the emotions of many. 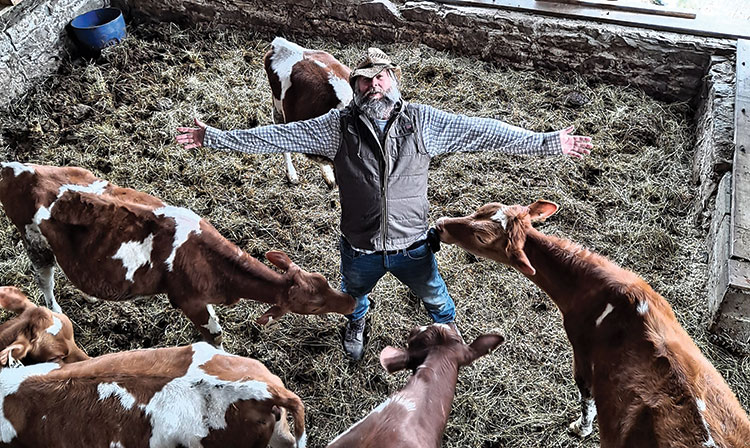 An empty barn often reflects the emotions of the farmers who once worked in it, symbolizing the closing of one of life’s chapters. A Pennsylvania farmer has taken those emotions and channeled them in a way that has touched the hearts of thousands who feel the same.

For Jeff Corle, who sold his Guernsey herd in early 2022 after struggling to make his microdairy and milk bottling business successful, seeing his barn empty triggered feelings of sadness and depression. But it also became the inspiration to write a song that has helped him work through those emotions and impacted many more people who felt the same.

Corle, who owns a fifth-generation family farm in Windber, recently wrote, recorded, and released his song “Empty Barn,” a ballad that echoes his feelings after he made the decision to sell his cows.

“I wrote this song because I was heartbroken and depressed after the cows left, and it was my way to work through that,” he said. “I had no idea it would resonate with the farming community the way it has.”

Corle has a long history of both farming and music. His mother gave him his first guitar when he was 10 years old, but he had no idea how to play it or even tune it. After tuning the bottom two strings, he wrote a song that he could play with just them.

“After high school, it was a toss-up between music and farming,” he said. “The farm economy at the time was so bad that, after college, my parents actually encouraged me to leave the farm and play music. They thought anything had to be better than farming at the time.”

He traveled to Nashville to try his hand at songwriting, working in Music City for more than a decade. He learned a lot, met a lot of people, and enjoyed “a medium amount of success” . . . but he didn’t like being told what to write.

“At that time, music success was based on what someone thought would sell records, and you had to write music that fit that image,” he said. “You made demo cassettes and had about 30 seconds for someone to listen to your song and make a decision. That wasn’t for me.”

His father asked him to return to the farm, but Corle said he’d agree only if they could transition to an organic dairy operation. They shipped their first load of organic milk in 2008 and built the herd up to 50 cows. “We did that for 12 years, and quite simply, I was burnt out,” he said. “When I sold that herd of cows, I thought I was cured of the ‘milking cow disease,’ but it turned out I was only in remission — and it came back.”

Corle decided to start milking cows again, but on a much smaller scale: three Guernseys. “My grandparents bottled milk for 50 years, and I always had it in my heart to try bottling myself,” he said.

In November 2020, he sold his first bottle of milk and expanded his herd to meet the rising demand as his market grew. “We expanded to eight cows, then held a fundraiser so we could go to 12 cows and expand our equipment,” he said, “but the market didn’t grow with us.”

He found himself spending enormous amounts of time trying to make the business succeed. Farming, bottling, delivering, building an on-farm stand, selling at farmers markets, and promotion was taking all of his time and energy. “I thought milking 12 cows and bottling a little milk would be a cakewalk, but it took more time than managing a 50-cow herd,” he said. “It was a lot of work as a one-man operation and I wasn’t going to get any bigger. Input costs were skyrocketing, and I could see the writing was on the wall to do something different.”

Most of Corle’s promotion and marketing of his Pleasant View Dairy products came through social media. When he decided to bring the dairy to a close and sell his cows, his followers responded.

“I had the best customers, just not enough of them,” he said. “I think they were sad and frustrated like I was.”

After the cows were sold, Corle went into depression. “After the truck left, it felt like something was ripped out of me with the finality of it,” he said. “This was a piece of my identity, and I was just heartbroken.”

He turned to the guitar in his farmhouse studio to help him. “The music had been on the back burner for a while — farming full-time and creating music don’t necessarily go hand in hand,” he said. “And I had the idea that people wouldn’t take a farmer seriously who was also a songwriter.”

A friend in the music industry commented one day how lonely and empty the barn must feel. “He said, you need to write a song called ‘Empty Barn,’ and I was floored,” Corle said.

He decided to let the idea “percolate” a bit before embarking on the songwriting. Going to bed that night, he was in the haze between asleep and awake when the first verse and the melody came to him. After battling with himself about whether he would remember it in the morning, he wrote the words down on a bedside notepad and recorded himself into his phone.

“When I woke up the next morning, I thought I had dreamt the whole thing until I looked at my phone,” he said. “Songwriters say when a song idea comes to you fast and furious, those are the best ones. In 40 minutes, I had the entire song written.”

What followed was indeed fast and furious. Corle recorded the song in his farmhouse studio and posted it for his social media followers to download for free. There were soon 1,000 downloads, all from followers sharing the post. “This was happening to me on a personal level,” he said. “I had no idea so many people would relate to the words.”

That response led to a trip to Nashville to book studio time. And that led to a group of professional studio musicians lending their talents to “Empty Barn” and creating the single, part of an album titled “Farm Animal.”

The album was recorded in May 2022, and Corle has been busy promoting his music independently ever since. In late July, the song was released to Spotify’s streaming service and has been downloaded more than he ever dreamed and from all over the world.

His most recent project with the song has also been fast and furious. He wanted to make a video that would resonate with other farmers. He put out a request for photos of barns, cows, and farm life.

“The response was unbelievable,” he said. “We received hundreds of pictures and chose the ones that best fit the story. It’s a story that’s organic and authentic and hopefully cathartic for others as well.”

The video was released on YouTube in August and quickly reached more than 35,000 views. “People have reached out to me saying I had captured exactly how they felt,” Corle said.

These days, much of his time is spent on promotion. Since his time in Nashville, he has learned a great deal about how to make music a full-time career.

“I’ve wanted to do this since I was small, but it always competed with farming,” Corle said.

He is already at work on new material, crediting “Empty Barn” for creating this opportunity.

“I believe 100% that I didn’t write that song so much as channel it and capture all the emotions that were flowing through me,” he said. “That title was a gift from God; the song just wrote itself.”

Editorial: Depooling needs to be in the conversation pool
Features
Related to:
features
In Features

Don’t let injuries get you down
By Andrea Stoltzfus