It started with a jug

In 2004, McDonald’s revolutionized how milk was offered in Quick Service Restaurant chains. These days, 80 percent of items on the menu at the world’s largest restaurant chain include dairy.

By Hoard's Dairyman staff   @hoardsdairyman
It began with one meeting centered on the thought that resealable plastic jugs would encourage more milk consumption when compared to the cardboard, gable-top milk carton. Since that early relationship success, both McDonald’s and Dairy Management Inc. (DMI) have forged a partnership that provides nutrient-rich dairy foods to McDonald’s customers and moves more dairy products on behalf of U.S. dairy farmers.

“McDonald’s was a game changer when they revolutionized how milk was offered in Quick Service Restaurant (QSR) chains across the nation,” said Sally Cummins Healy, vice president of nutrition research and partnerships for DMI, which manages the national Dairy Checkoff. “DMI had a foundation in bringing that change about in the marketplace.

“It started with the School Milk Pilot Program funded by the Dairy Checkoff,” recalled Healy. “That research found that kids really drink more milk when it is offered cold, in a variety of flavors, and in fun, resealable plastic bottles,” she said, noting the problem was most schools didn’t adopt the program because of the added packaging costs.

“We then shared the information with McDonald’s and it was intrigued by the results,” said the DMI nutrition specialist. “McDonald’s conducted its own pilot test and saw improvement in sales as well. That’s when McDonald’s went out and launched the resealable plastic milk jugs nationally.”

“We switched to offering milk and juice with Happy Meals,” said Lynn Yu, director of nutrition at McDonald’s USA who noted that McDonald’s saw improved take rates of milk after soda was visually dropped from the Happy Meal menu. The menu board actually lists fat-free chocolate milk, 1-percent lowfat white milk and then apple juice in that order.

“There was an additional 21 million servings of milk and juice sold during the first one-year window. As a result, soda consumption dropped 8 percentage points,” said Yu when discussing the addition of fat-free chocolate milk, juice, and low-fat white milk as displayed menu options.

“These days if you go to Quick Service Restaurants, you will see that resealable plastic milk bottles are the norm,” said Healy. “It’s an example of McDonald’s leading the way and others following.”

What started with a conversation involving the little, resealable milk jug, and later support for the 2008 launch of McCafe beverages, which include options that contain one serving of dairy, transcended into a formal partnership in 2009.

That’s when McDonald’s and DMI entered into a three-year contract. Not only does the contract involve DMI placing two dairy scientists at McDonald’s, it also involves sharing additional Dairy Checkoff talent on innovation, nutrition, and sustainability.

How well has the partnership been going?

“DMI provides us with dairy expertise, and we can move exponentially faster on product development,” said Molly Starmann, senior director of brand public relations and reputation at McDonald’s. “DMI is a partnership that stands out at McDonald’s. It’s best in class,” said Starmann, who has worked with McDonald’s for 10 years and helped bring the Egg White Delight featuring white Cheddar cheese to the McDonald’s menu.

That is high praise coming from the world’s largest restaurant chain.

In the U.S. alone, McDonald’s has 14,000 stores and serves 27 million people each day. Worldwide, the company developed by the visionary Ray Kroc has 34,000 franchise locations. In fact, these days McDonald’s is bigger than these three restaurants combined — Taco Bell, Starbucks, and Subway. As a result, it has a global impact on establishing food trends.

For DMI and the dairy farmers who fund the Dairy Checkoff, the initiative results in more dairy sales at McDonald’s and further changes the marketplace and how restaurants conduct business. Data from 2015 show McDonald’s is using 14 percent more dairy on a milk equivalent pound basis when compared to 2009.

The dairy scientists and McDonald’s nutritionists work side by side in the same building and interact on a daily, and even hourly, basis. And it shows. “This yogurt is made exclusively for McDonald’s,” said Myrick. “It provides just 50 calories and 25 percent less sugar, still with a great taste and a good nutrient package,” said Myrick.
“Kids love it, and Go-Gurt is a center character in our storytelling to kids and moms,” added Starmann, a McDonald’s media specialist. “Since introducing Go-Gurt in 2014, we’ve served nearly 300 million tubes with our kids’ meals.”

“What was the original recipe of the Egg McMuffin? What did we use before liquid margarine?” asked Chef Jessica Foust of her team when reevaluating the Egg McMuffin recipe.

“Why don’t we go back to butter again?” asked the chef who serves as director of culinary innovation. 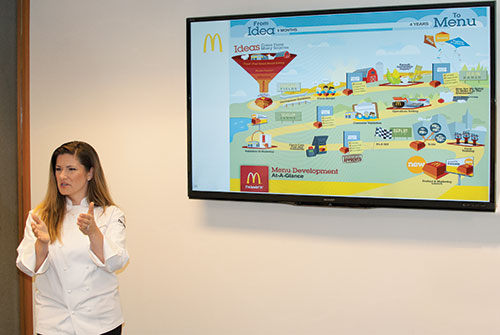 It can take up to three years to bring new products to the marketplace.
Jessica Foust, who serves as director of culinary innovation for McDonald’s

“That response spurred a lot of discussion throughout the team,” recalled Foust.

“Why are we overcomplicating the Egg McMuffin with an ingredient like liquid margarine. Butter just tastes better,” she said. “Plus, you can use butter on more foods and you can feel better about it.

“Switching back to butter was the right decision for our restaurant guests, and so we went back to the original recipe for the Egg McMuffin,” she went on to say.

“Butter’s use had to be evaluated everywhere . . . on the foods such as muffins and biscuits, along with performance on the restaurants’ griddles,” said Myrick. “This included thinking through how our restaurant teams would apply butter to the sandwiches in each kitchen,” said the DMI dairy scientist who works exclusively with McDonald’s.

That full-scale evaluation surrounding butter also included working with butter suppliers. “That is no easy task when you are talking about onboarding a new supplier, let alone onboarding butter across the system. We put a lot of time and energy into this entire process,” said Myrick, noting that the butter delivered to McDonald’s comes in sticks just as consumers would use at home.

The net result has been an additional 500 million pounds of milk equivalent annually. It should be noted that the butter launch also coincided with the launch of McDonald’s All Day Breakfast menu.

In addition to these products with a dairy focus, the McDonald’s-DMI partnership helped bring Mozzarella sticks and Buttermilk Crispy Chicken to the menu. Both feature the iconic Real Seal, highlighting real dairy ingredients.

As a result of this effort, 80 percent of the McDonald’s menu items now feature some form of dairy. And in a big way, the partnership helps bring McDonald’s back to its roots, as Ray Kroc got his start selling milkshake machines to the fledging restaurant chain. So impressed was he with its ability to sell milkshakes, he eventually bought McDonald’s and guided it to become one of the world’s most recognized brands.

Where does the energy go?
By Hoard's Dairyman staff