The gut has a role in milk production efficiency

Rumen microbes play a part in efficiency of milk production, but researchers are still trying to determine what that is.

By Paul J. Weimer   And   Lori Ward Bocher
The authors recently retired from the USDA-ARS U.S. Dairy Forage Research Center, Madison, Wis., where they were a research microbiologist and agricultural information specialist. 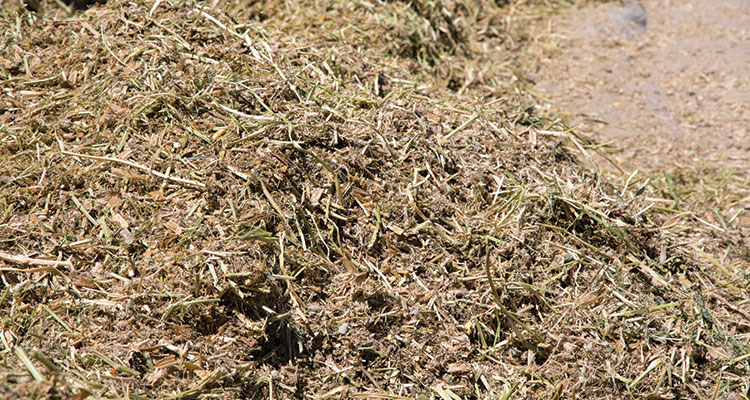 In many ways, when you feed a cow, you’re really feeding the microbes in its rumen. The cow cannot directly utilize most feed components, even simple sugars. It relies on rumen microbes to convert feeds to volatile fatty acids (VFAs) that the cow absorbs and uses to make energy and milk. About two-thirds of feed digestion and 90 percent of fiber digestion take place in the rumen with the aid of microbes.

While rumen microbes help cows digest feed, they themselves also serve as an important source of nutrients for cows. They’re typically about 55 percent protein (dry weight basis). On some rations, the microbes provide half of the total dietary protein need of the cow. In addition, rumen microbial protein has almost the perfect mixture of amino acids — one that has not been duplicated by any ration. And rumen microbes are a particularly rich source of lysine and methionine, two amino acids that are difficult to supplement in dairy cattle rations.

Recent scientific advances have made it easier to identify and study the different microbial species in a cow’s rumen. Due to these advances, we have learned about thousands of species of microbes that we couldn’t see in the past. It appears that each cow has its own population of rumen bacteria, or a unique bacterial community composition (BCC).

Although cattle appear to have a ruminal “core microbiome” with respect to the most abundant groups, there is sufficient variation in the identity and relative abundance of microbial species across individual cows to conclude that there is no typical or atypical microbial community. Like fingerprints, no two BCCs are alike.

And like fingerprints, it appears that they can’t be easily changed if the cow is kept on the same diet. In a previous study, we performed a near-total ruminal exchange between a pair of cows with very different BCCs. Within a few weeks, each cow’s BCC was back to its original state. The cow appears to have more control over the BCC than the diet or introduction of other microbes into the rumen. 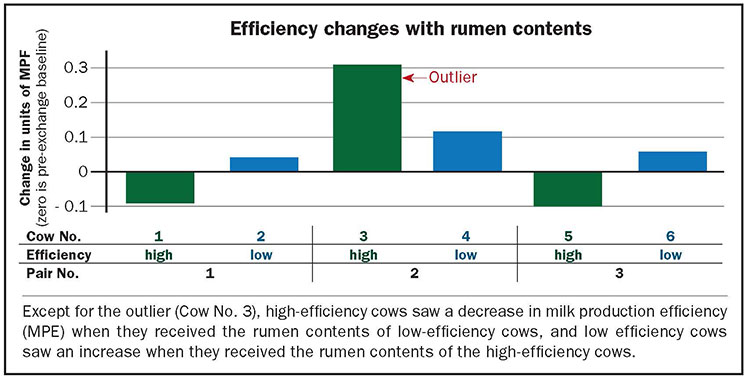 Feed is the largest single cost of production for all livestock species. Consequently, efficient utilization of feed has an important effect on a producer’s bottom line. It has long been known that individual animals within a herd fed the same diet differ in feed efficiency. These differences are commonly thought to be due to genetics, but the heritability of residual feed intake (a common measure of feed efficiency in dairy cows) is rather modest. This suggests that other factors may be important in explaining differences in feed efficiency among cows.

In collaboration with the laboratory of Garret Suen at the University of Wisconsin-Madison, we showed ruminally cannulated cows with different dry matter intakes (DMI) at the same level of energy-corrected milk (ECM) production had substantial differences in BCC. This suggested a role of the rumen microbiome in milk production efficiency.

Parallel studies by Itzhak Mizrahi’s group in Israel have reached similar conclusions and have demonstrated that different microbial fermentation profiles appear to underlie these efficiency differences. All of these studies, however, have shown associations (statistically significant correlations) without directly demonstrating a cause and effect.

It depends on the cow

In order to address the relationship more directly, we continued our collaboration with Suen’s lab and selected three pairs of cows from our earlier study at the U.S. Dairy Forage Research Center Farm in Prairie du Sac, Wis.

These six cows had displayed within-pair differences in DMI at a similar level of ECM production, when measured at three specific ranges of days in milk (76 to 82, 151 to 157, and 251 to 257) over two lactations. We then performed near-total exchange of rumen contents, through a rumen cannula, within each pair during their third lactation.

Because the cows varied in their stage of lactation at the time of the exchange (thus confounding direct comparisons of efficiency), we examined shifts in milk production efficiency within each cow from eight days prior to exchange to 56 days after exchange. We found that for five of the six cows, we were able to temporarily (for about one week) push milk production efficiency in the opposite direction based on contents exchange (see figure).

We also examined BCC using next-generation sequencing of the 16S ribosomal RNA (rRNA) genes of the bacterial community. These genes are a widely used method of assessing BCC in different microbial habitats. Based on results from a previous rumen contents exchange study with different cows that did not include feed efficiency measurements, we expected to see a gradual return of BCC after the contents exchange. In fact, we did see a return toward the original BCC over a similar time course of about one week. These results provide evidence of a direct effect of rumen BCC on milk production efficiency.

We have known for some time that while the rumen microbial community changes with diet, there is substantial host specificity, that is, each cow harbors its own unique rumen community. We also know that this community is very resilient and tends to reassort itself when it is perturbed. This is one reason that it has been difficult for producers to effectively apply probiotic microbial strains without frequent dosing. The results of our experiment reinforce these concepts.

However, it is interesting to note that one of the six cows displayed an unexpected response to the contents exchange and became more efficient after receiving the rumen contents from a less-efficient cow. This suggests that at least in some cows, BCC may not yet be fully optimized for production efficiency.

Additional studies on the composition of the rumen microbial community — especially the identification of the roles of specific microbes and the effectiveness of particular microbial assemblages — are likely to provide strategies for fine-tuning rumen performance for improved milk production efficiency.

Note: The author’s peer-reviewed article on this study, “Transient changes in milk production efficiency and bacterial community composition resulting from near-total exchange of ruminal contents between high- and low-efficiency Holstein cows,” was selected as an “Editor’s Choice” by the Journal of Dairy Science for the September 2017 issue. As such, the article is freely accessible to all on the journal’s website: www.journalofdairyscience.org.
Related

They found a purpose for their dairy
Features
Related to:
features, nutrition
In Features

A reset on calving ease
comments powered by Disqus