Dubbed as ‘The Sale of the Century,’ the Elite Dairy’s complete herd dispersal on Wednesday, September 4, 2019 in Copake Falls, New York, held true to its advertising as cattle sales broke National Brown Swiss records. 155 head of registered Brown Swiss Dairy Cattle sold as the Elite Dairy Partnership of Ken Main and Peter Vail and their Cutting Edge prefix dissolved after 16 years. The popularity of the Brown Swiss, second most popular breed of dairy cattle in the world with a population of over five million, was evident with 72 buyers coming from 20 states and three providences in Canada to attend the event. The average price of the cattle selling was $8,948. Sale Manager Wayne Sliker reports there were 433 registered bidders for the auction which confirms the tremendous interest in the Cutting Edge genetics. 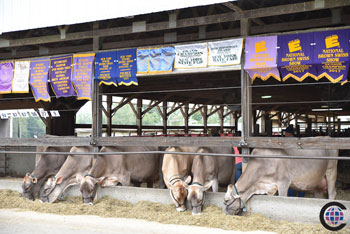 Waiting to take their place in new herds are a few of the 155 head that sold to 72 buyers in 20 states and Canada at the Elite Dairy’s complete herd dispersal sale.
The day started with a real ‘bang’ as the 2018 World Dairy Expo Supreme Champion, Cutting Edge T Delilah, entered the ring to begin the sale. Delilah broke the Brown Swiss Cattle Breeders’ Association’s top selling cow list with a price tag of $210,000! The buyers of Delilah are a new partnership of Ken Main and a Kentucky physician, Dr. Kenny Joe Manion. Delilah is only the second Brown Swiss cow in the World Dairy Expo’s 52-year history to be awarded the Supreme Overall Champion in the Open Show and the Supreme Champion in the Junior Show. Delilah is the 4th Brown Swiss to hold the Supreme Champion title in the World Dairy Expo’s history. Delilah has been classified at a 2E95/95m, the highest score available and she is matched with only six other Brown Swiss cows in the United States.