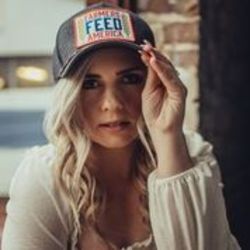 stephanie nash
As a fourth-generation dairy farmer who’s dedicated the majority of her life to the family farm, STEPHANIE NASH quickly learned compassion for the agriculture community. Her latest venture also incorporates her other passion and career, country music. She’s created an eight-part video series titled ‘The Life of a Farmer’ for her YouTube channel to bring awareness to the needs of those that cultivate our lands and waters.
“Growing up I saw strong agricultural communities diminish,” says Nash. “Sadly, so many farms that are vital to providing food do not get the same opportunity as other businesses to grow and flourish and their success is critical. My hope is that the series is educational and sheds light on the importance of farming.”
Episode one of the online series, out now, features a charming, nearly 98-year old Paul Smith O’Dell of Laurens, South Carolina. He showcases his cotton, beef and crop farm, now run by his children, and 1947 tractor, the first one released after WWII which he bought new for $146.
In conjunction with the release of Nash’s second and self-penned single “Time Changes,” which debuts October 9 and is a message of hope for the industry, Nash is awarding scholarships of the same name to Future Farmers of America students. The contest, open now through October 1, encourages young farmers to submit a video stating why they love agriculture, how they’re making a difference in their community and how the money will benefit their chapter. Winners will be announced October 24. For more details on how to submit, watch the video here.
New episodes of featured farms and their cultivators from across the U.S. post Fridays at 12pm CT on Nash’s YouTube page. She will profile agriculturalists in Alabama, Mississippi, Montana, Tennessee and more.
Nash’s debut single “Best Side of Me,” lauded by music critic Bob Oermann as ‘gripping and ear catching’ lands at #75 this week on Music Row’s Country Breakout Chart. ‘Her confident, penetrating vocal delivery smacks every note resoundingly… Play it.’ Listen here and everywhere music is streamed and sold.
In Industry Buzz

Merck Animal Health Bestows $270,000 in Scholarship Support to 54 Veterinary Students Around the World