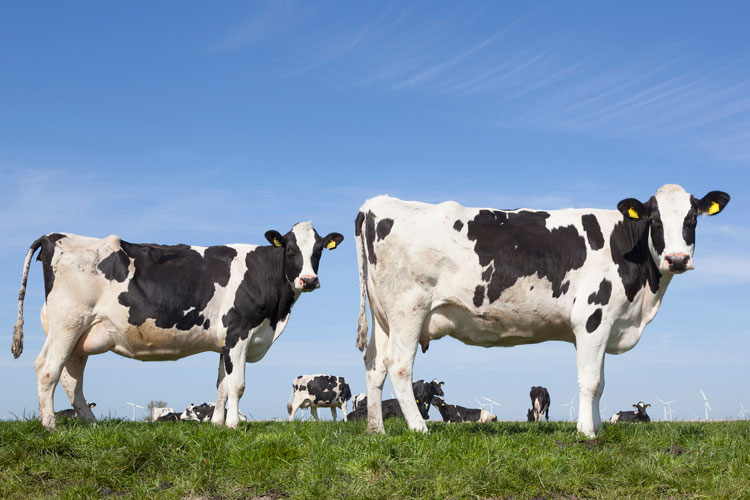 Dairy producers are now able to breed for more feed-efficient cows. The trait — Feed Saved — debuted with the genetic evaluations published on December 1 by the Council on Dairy Cattle Breeding (CDCB). This new tool can help reduce dairy’s environmental footprint and enable producers to save on feed costs, the largest expense item on most U.S. dairies.

Cows vary in the ability to convert feed to milk, and the Feed Saved trait documents those differences. It is the first national evaluation in the U.S. to help dairy producers leverage genetic variation to develop a more feed-efficient herd.

How it works
This December, 514,021 Holstein bulls received evaluations for Feed Saved, ranging from -782 to +900. This means daughters of the top bull are expected to consume 900 pounds less feed per lactation while maintaining similar production.

Feed efficiency has a heritability of approximately 14%, which falls midrange relative to other traits. Feed Saved currently has a lower reliability than other common traits, with bulls averaging 30% reliability in December, given the smaller number of reference cows with actual data on feed intake and related factors.

Measuring feed intake
While genetic selection for feed efficiency has been a longtime goal, it is difficult to measure and evaluate individual animals. Genomic tools and data technologies now allow us to identify and directly select for animals with that genetic advantage. The goal is to identify specific cows that eat less than expected while maintaining production and body condition.

To develop genomic evaluations, the necessary data — daily feed intake, milk yield, milk composition, body weight, and body condition score — must be measured for a genotyped reference population. This work has been a collaboration between CDCB, United States Department of Agriculture (USDA), and several universities.

The initial Feed Saved evaluations are based on a reference population of more than 6,300 Holstein cows in research herds across the U.S. Adding data for more cows continues as a high priority and collaborative effort.

The CDCB website includes additional details on Feed Saved, a second new trait — Heifer Livability, and other updates made with the December 1 genetic evaluations.

While the introduction of Feed Saved is an exciting milestone, researchers continue to seek ways to enhance the genetic selection tools, better understand genetics related to methane emission, improve dairy efficiency, and support the industry’s commitment to a reduced environmental footprint.