Wisconsinites should not have to live in fear of healthcare costs 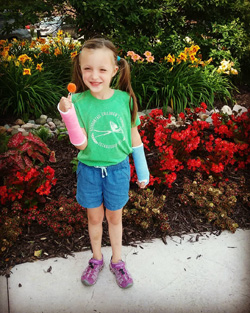 In the summer of 2019, I took my girls down to the Stokke Trail, an easy stretch of asphalt that runs along the Red Cedar River in Menomonie. My oldest daughter, Inga, was 6 at the time and still learning to ride her bike. I wanted to let Inga ride the open trail, and give her a chance to work on getting her bike up off her training wheels. We went up the trail a bit, with Inga leading and me behind pushing her younger sister, Harriet, on her trike. Inga was doing great, but on the way back, she must have been getting tired. She came to a spot where the asphalt had caved in, ever so slightly, just enough to veer her off the trail and down the very steep hill leading down to the river. Because of her training wheels, the bike did not fall over as she picked up speed. Inga couldn’t swim, and the river’s current, just below the dam’s spillway, would be intense, even for a serious swimmer. This is what I was thinking about as I sprinted after her, my body hollowed out by fear. It’s what I was thinking when, for a few terrifying seconds, I lost sight of her.

She didn’t go in the river. Fortunately, she was stopped by a fallen tree. When I got to her, she was crumpled up under her bike, tangled up in the brush. I helped her stand. She was trembling and had blood in her mouth. I asked if she could walk; she thought so. She could move her fingers and arms but it hurt. When we got back to the trail, I handed her a water bottle so she could rinse out her bloody mouth, and we made our unsteady way back to the car. Inga kept telling me that she thought we needed to go to the hospital, and that maybe her arm was broken. I assured her it was not broken, since she could move it so freely. (In case it is not glaringly obvious at this point: I am not a medical doctor.) I told her we would get her home, settle her on the couch under her blankie, get some Ibuprofen, and she would be fine.

The truth was — and I am not proud of this — I was thinking about the last time we took one of the kids to the emergency room, maybe a year before. Harriet, who had just started walking, came home from daycare with a wonky leg. She would take a step or two and her knee would buckle. An x-ray showed it was nothing, a sprain. Either because of our deductible or since the x-ray didn’t turn up anything, it was deemed “unnecessary,” and we ended up paying more than $400 for it. So when Inga was saying she needed to go to the hospital, my response wasn’t, “Sure, baby, anything you need.” Instead, I was thinking, “That’ll cost us another four hundred bucks.”

By the time we got to the car, there was another voice in my head, this one a little more insistent, asking, "What kid wants to go to the hospital?" I finally stopped thinking about the cost and instead listened to what my daughter was telling me. We went straight to the hospital, where we learned she had not just one, but two broken wrists. Our family is lucky – we have insurance through my wife’s employer – yet my fear about the bill had allowed me to convince myself that my daughter was fine.

When I think about it now, I wonder if things would have been different if we didn’t have insurance ­— if I was facing a $4,000 or $40,000 bill instead. I like to think I would have done what was best for my daughter no matter the cost, but for those without affordable insurance, the decision sometimes isn’t so easy.

When Congress passed the Affordable Care Act in March 2010, the bill provided funding to assist states in expanding state-run Medicaid programs, like Wisconsin’s BadgerCare. States were allowed to accept the expansion or opt out. Nationwide, Republican state lawmakers refused the offered expansion, and the federal aid that would have gone with it, largely for ideological reasons. Wisconsin is one of twelve states that continues to refuse the expansion, which means that, to date, lawmakers in Madison have left close to $5 billion in federal funding on the table, money which could have freed up revenue streams for other initiatives, and would have helped tens, even hundreds of thousands of Wisconsinites gain access to healthcare. Now, as part of the most recent COVID relief package, another $1 billion has been allocated for Wisconsin to expand BadgerCare, on top of the $450 million Wisconsin would receive under the ACA to help Wisconsin workers gain access to healthcare. Yet, again, Republican lawmakers have dug in their heels.

Under current guidelines, Wisconsin’s BadgerCare program provides access to health services for individuals and families who are at or below the federal poverty level. That means if you are unmarried with no children and are working full-time at the current federal minimum wage of $7.25 per hour, you would not be eligible to receive BadgerCare; if you are unmarried with one child and make $8.40 per hour, working full-time, you would also be ineligible. The proposed expansion would move the threshold from “at or below” the poverty level, to 138 percent of the federal poverty level, covering an estimated 82,000 more people.

Wisconsin Farmers Union (WFU) is among groups currently advocating for the proposed change and for lawmakers to take federal funds and expand the program.

“The need for access to affordable health care comes up regularly at our annual convention and in conversations we have with members," said WFU Organizing Director Bill Hogseth. "When you’re a farmer, you’re self-employed and not getting insurance through work. Depending on other factors, you may or may not be able to afford private insurance.”

Hogseth pointed out that, in Wisconsin, as in many other states, rural counties have the highest uninsured rates, which means rural hospitals in particular feel the hit when people can’t afford to pay for healthcare. “It hasn’t gotten too bad here, yet,” he told me, “but in southern states where lawmakers have refused the expansion, you’re seeing rural hospitals having to shut down.”

When conservative media talks about social programs like BadgerCare, invariably they paint a picture of lazy people who don’t want to work. That certainly doesn’t describe the people I have met or talked to who are, or have been, on BadgerCare.

Take my friends John and Simone, for example. For several years they were caretakers on a farm. In exchange for their work, they were provided housing, but they didn’t make much money and were eligible for BadgerCare. The program covered medical costs for the birth of their second child, and when their oldest son broke his arm, that was covered, too. John, who is a woodworker, severely injured his hand in a table saw accident a few years ago, and it covered all his expenses, including a $20,000 helicopter ride (which many with private or employer-funded insurance learn is not covered under their plans). However, in some ways, the family is also trapped. They are no longer on the farm, which means they have added the expense of housing. John brings in money through his woodworking and as a general contractor, and Simone has picked up days as a substitute teacher, but those jobs don’t come with insurance, so they have to be careful. If they make too much money, they could lose access to health care. They don’t want to be living below the federal poverty line, but at the same time they can’t just take any job that opens up, because if it doesn’t have health insurance, and it makes them ineligible for BadgerCare, then they, and perhaps more importantly, their kids, no longer have access to their doctors. The proposed expansion would mean more freedom for my friends, and people in similar situations, and would open up employment possibilities that are currently closed to them when jobs don’t offer insurance.

No country’s healthcare system is perfect. People receiving care through a nationalized health program, like those in Canada or the UK, can often experience longer wait times for elective procedures. Such a system is certainly imperfect, and I am sure that those countries are working to fix those sorts of problems. But a system, like the one we have, where some people have their health costs paid for while others are bankrupted by them, is not only imperfect, it is immoral.

If we are going to continue to rely on employers to provide Americans with access to health care, then it is our responsibility to implement programs, like BadgerCare, that extend healthcare access to those people who work jobs that, for whatever reason, do not provide them with insurance, including the self-employed. Expanding BadgerCare under the current proposal does not do nearly enough to make healthcare access fair and equitable in Wisconsin, but it’s a step in the right direction, and the only decent, human thing to do, really, is take that step.

Bayard Godsave writes for Wisconsin Farmers Union as a freelance Rural Voices Correspondent. He lives in Menomonie with his family.
In Industry Buzz