Whether they meant to or not, previous generations of women working in agriculture serve as role models for today’s dairy industry.

My paternal grandfather was a dairy farmer, but he also worked a job off the farm to help make ends meet. That meant my grandmother was often at the helm, managing the home, their seven children, and the farm. She was not simply holding the title of farmer’s wife; she was a hard-working dairy farmer, too.

Many of us had women in our family’s past that held vital roles on the farm. Whether in the barn or out in the fields, these women were female farmers long before terms like “dairy girl” or “FarmHer” existed. 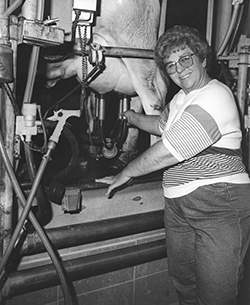 Mary Cameron of Hanford, Calif. Submitted photo.
A reader recently shared with us about the passing of her mother, Mary Cameron. Mary was a dairy farmer’s daughter, and after marrying Arthur (Atze) Atsma, the young couple built their own dairy in Artesia, Calif. Following the untimely death of her husband, Mary continued to run the farm. She later married Louis Cameron, and they relocated to Hanford, Calif., in 1974. For more than 60 years, Mary was grateful to be a dairy farmer.

Beyond the farm, her involvement with dairy was vast. She sat on the board of directors for the Danish Creamery, and her family believes she was the first woman to serve on a co-op board in California. She was also the first woman to serve on the board of the Western United Dairymen Association, and she was a director of the Dairy Council of California for many years. She was a member of the National Dairy Board for two terms. Mary was active with the Kings County Farm Bureau and in 2001 was named the Kings County Agriculturalist of the year. She was also very involved with the Kings County Dairywomen group.

A notable reference in her obituary was when Congressman Jim Costa recognized her in the California House of Representatives for her life’s work in the dairy industry. He pointed out that, in a male-dominated industry, Mary did not wish or expect to be treated differently because she was a woman. In addition, he said she always spoke her mind and worked tirelessly for her industry. 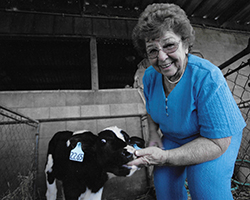 Mary Cameron of Hanford, Calif. Submitted photo.
Her daughter echoed those sentiments, saying that her mother was proud to be a dairyman and didn’t like to be referred to as a dairywoman. And she was right – a farmer’s success in the barn or out in the industry should not be determined by their gender. Yet, female farmers like Mary, who were active on the farm and in dairy organizations, do serve as role models for the many women who work in the industry today.

Oftentimes, farmers are wearing many hats. Between managing the farm, caring for animals and crops, handling home or family responsibilities, volunteering with local or agricultural organizations, and more, a dairy producers’ time is in short supply. People like Mary Cameron and my grandmother, who worked hard and remained passionate supporters of the dairy industry, are an inspiration to male and female farmers alike.