The disease that’s everywhere, every day 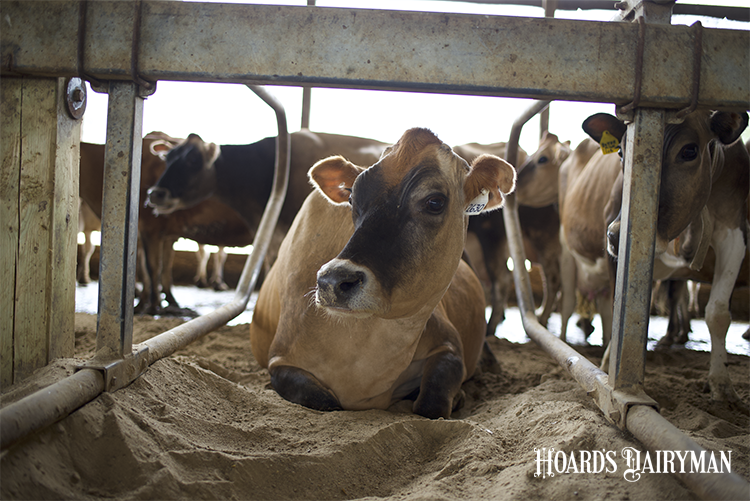 Much is researched, reported, and written about the health challenges cows can face in their transition period, and for good reason — a cow’s body is going through tremendous change around calving that can leave it vulnerable to disease and distress. Heifers, especially, can be at risk for a rough transition as they have their first experience with these physiological changes as well as new stressors such as milking and frequent handling.

One effect of calving that often hits heifers the hardest is udder edema. Although noninfectious, this swelling of the udder can be painful and make it more difficult to milk out during the first few weeks of lactation. Udder edema is a disease, said veterinarian Dona Barski, and one that is extremely common despite the few details we really know about it.

“For a problem that is everywhere and in every herd I go to,” said Barski on a Michigan State University dairy extension podcast, “there is very little actual information on why this happens and what we can do to prevent it.”

In general, edema is most severe in first and sometimes second lactation animals because they haven’t yet developed much of the vasculature necessary to pump blood from the udder back to the body. “Edema forms when there is a problem from blood delivery to the area and excess fluid that cannot be moved out in a quick manner,” Barski explained.

Genetic advancements in milk production capability means more blood is pumped to the udder for that purpose. For heifers who still have an underdeveloped milk vein (the most prominent vein carrying blood away from the udder), this creates an excess of fluid in the udder.

Aside from making it more difficult and stressful to be milked, the swelling of edema can lead to further issues, too. Extension dairy educator Cora Okkema noted that edema is a risk factor for clinical mastitis and has been shown to reduce daily milk production. There’s also an interaction with other transition disorders, including subclinical ketosis.

That connection to other diseases is very concerning, said Barski, especially considering that higher producing animals are most prone to both transition problems and edema. Welfare must also be considered, as heifers with a painfully swollen udder might not lay down or get up to eat or drink as normally as they might. Trying to get comfortable when lying down or having the milker repeatedly fall off in the parlor could lead to situations that put these animals at greater risk for mastitis, the Michigan vet added.

To combat edema in fresh cows, many farms use a mint udder balm. The essential oils in these compounds are a bit skin-irritating, and although Barski said there is no data on if this helps stimulate blood flow, the flush that occurs on the skin and much anecdotal evidence suggests it works that way. Some smaller herds may also use massaging techniques or heat compresses to apply pressure on the udder to displace the fluid.

Nutritionally, Okkema explained that a high-salt diet can lead to more severe edema, so she advised not feeding heifers the same anionic salt ration that dry cows may be fed to prevent milk fever. “It’s crucial to feed your late gestation heifers and late gestation cows different diets,” said Okkema, who studied udder edema under Temple Grandin for her master’s degree.

There is still much unknown about udder edema, and future research will be key in this area, both Okkema and Barski recognized. For now, heifer feeding strategies and topical treatments are the most recommended practices for helping ease one of the challenges young cows may face as they enter the milking herd.