What condition are your cows in?

Body condition scores can be used to manage disease, fertility, and milk yield.

The author is a professor emeritus of animal sciences and industry at Kansas State University, Manhattan. 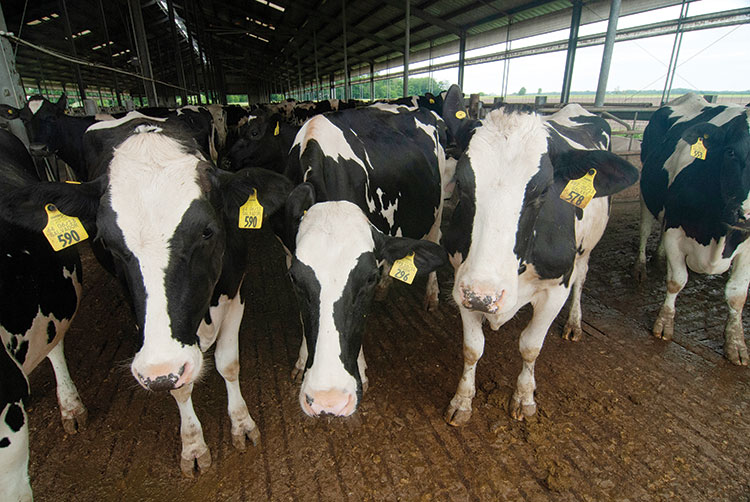 Strategic use of body condition score is a smart practice, and achieving BCS goals can reduce transition cow problems.

During a cow’s lactation, changes in body condition and body weight occur that influence future milk yield and fertility outcomes. Evaluating body weight alone is not a good indicator of body reserves (fat and muscle) because body weight is affected by parity, stage of lactation, frame size, gestation, and breed.

To better track the issue

Because of these shortfalls, methods to assess body condition score (BCS) were developed to measure the amount of fatness in the cow. The focus areas evaluate fat cover over the hooks, pins, thurl region, short ribs, and tail head area.

Scoring body condition is subjective in nature, but reliability and consistency of individual scores by one or several individuals can be achieved with proper training and practice. One pioneering study reported that among three experienced evaluators and one less experienced evaluator using the standard five-point scale (1 = severely under-conditioned and 5 = severely over-conditioned), the evaluators either agreed or deviated by no more than 0.25 BCS units in more than 90% of the evaluations of Holstein cows.

A number of good illustrative resources for learning how to score body condition are available online by searching for “body condition scores dairy.” An excellent 12-minute tutorial video describing how to assign body scores is available at on.hoards.com/BCS.

It starts at dry-off

Research indicates that cows should have a BCS in the 3 to 3.25 range when the dry period begins. If cows are too fat (greater than 3.75 BCS) at dry-off, it is best to keep them from losing BCS during the dry period. On the other hand, thinner cows (BCS less than 3) may benefit from extra dietary energy during the first three weeks of the dry period to achieve optimum calving BCS. However, avoid excess energy consumption during the entire dry period because it causes a larger decrease in late prepartum intake compared with cows with controlled energy intake.

Alternatively, one could evaluate cows 30 to 60 days before dry-off and provide those thinner cows with higher energy diets to elevate BCS to at least 3 in late lactation. One reason for this suggestion is that metabolizable energy is converted to tissue energy (fat storage) more efficiently than to milk energy while the cow is lactating. In addition, any gain in BCS during the dry period in thinner cows resulted in greater milk, fat, and protein and reduced somatic cell count during the next lactation.

It is recommended to maintain a 3 to 3.25 BCS until calving. In a study of 16,104 lactations from 9,950 Holstein cows on two California dairies, any loss in BCS during the dry period resulted in more postpartum uterine disease and indigestion; more postcalving treatments with antibiotics, anti-inflammatories, and supportive therapy; and reduced the likelihood of pregnancy after the first and second inseminations.

Some have recommended a higher calving BCS between 3.25 and 3.75, but cows with greater BCS at calving lose more body condition after calving and tend to have lower feed intake. Remember that loss in BCS is associated with loss in body fat and some muscle. Note also that the correlation between body condition and body fat seems to become weaker at the bottom of the BCS scale (BCS 2). This occurs because fat cover is limited and the reduction in BCS at these levels indicate a loss of muscle protein, not internal fat.

Energetically, the use of body tissues accounts for about 30% of milk production during the first month of lactation, resulting in a negative energy balance. In other words, more energy is exported in the form of milk than is ingested as dietary energy.

The deficit is made up by metabolism of the cow’s body fat to produce fatty acids for liver production of glucose. In addition, some muscle protein is metabolized to amino acids for milk synthesis and glucose production. This deficit in energy, measured in mega-calories (Mcal) of net energy for lactation (NEL), can be as much as 17.5 Mcal per day, which is sufficient energy to produce 57 pounds of milk per day.

The postcalving duration of negative energy balance can range from five to 14 weeks until dietary intake rises sufficiently to make up the deficit in energy. In other words, dietary intake generally lags behind the peak in milk yield. Energy balance begins to decrease during the last few weeks before calving primarily because of a 30% to 35% reduction in precalving feed intake.

Our recent study demonstrated the percentage of postcalving loss in body weight (BW) and BCS during the prebreeding period in 82 primiparous and 78 multiparous cows that calved between December and July (see figure). Primiparous and multiparous cows lose a similar maximal amount of their postcalving body weight by Week 5 (8% to 9%), but older cows continue to lose BCS until Week 5 compared with younger cows that stabilize by Week 3. The goal is for cows not to lose more than 0.50 BCS units between calving and first insemination.

Postpartum loss in BCS (not body weight) is predictive of postpartum disease risk, fertility, and milk yield. Changes in BCS during the first 3 weeks after calving are associated strongly with metabolite markers of health, ovulation and estrus, and milk yield.

Cows with a BCS greater than 3.5 had a two-fold greater risk for ketosis compared with those calving at BCS of 3.25. Remember that fatter cows mobilize more fat tissue, which reduces feed intake and elevates milk production, both of which contribute to a greater risk of metabolic disease. Multiple studies also found that feeding more energy in the diet could not overcome BCS loss during early lactation. The primary way to control BCS at first insemination is to manage BCS before calving (during late lactation and the dry period).

Based on many studies, the table shows recommended BCS for different phases of the lactation cycle. Strategic use of BCS to manage body condition of cows is a smart management procedure, and achieving these BCS goals can reduce transition cow problems and metabolic disease, while improving postpartum milk yields and pregnancy outcomes. Happy A.I. breeding!

Don’t let injuries get you down
By Jeff Stevenson, Kansas State University