Give your calves fresh, dry air to breathe 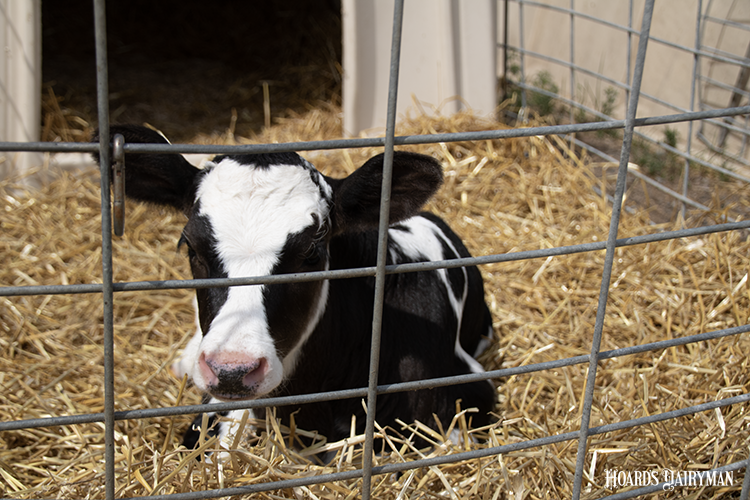 Respiratory disease has consistently been one of the top two causes of both illness and death in preweaned and postweaned dairy calves for decades. Perhaps more than any other calfhood disease, an animal’s housing facilities affect the prevalence of respiratory issues as they either encourage or inhibit clean, fresh air from reaching the calf.

Poor air movement, high humidity, or high atmospheric ammonia are all facility-related concerns that can lead to diseases such as pneumonia, said John Tyson in a Penn State Extension webinar. On the other hand, facilities that are designed well can help an animal resist disease by reducing the challenge of exposure to pathogens.

Tyson, an agricultural engineer, specifically focused on the role ventilation plays in calf health. He defined a good ventilation system as one that provides air exchange to control the levels of moisture and pollutants, facilitates a uniform distribution of fresh air, and minimizes drafts. Drafts are typically defined as any wind over 0.75 miles per hour.

The most important and hardest goal to achieve in ventilation for young calves, according to Tyson, is controlling the moisture level. Just in respiration, an 80-pound to 100-pound calf exhales 1 ounce of water per hour. While that might not sound like a lot, consider the number of calves in an area and also that moisture is evaporating from drinking water, manure and urine, and bedding material. “There’s a lot of moisture coming off that pack they’re living on,” Tyson pointed out.

That moisture needs to be forced out of the calf’s living environment. Moisture is mostly forced out of lactating cow barns by bringing in fresh air because when it warms up with the body heat of the animals, the air expands and has more room to hold moisture. “Where it gets tough with calves is they have very little excess body heat,” Tyson noted. So, we look to other solutions.

Natural ventilation provides fresh air for calf hutches and other open-sided facilities. Tyson advised orienting these buildings to take advantage of open winds. However, it is difficult to control drafts or wind squalls when these buildings get longer than 30 feet, he said. In those cases, he recommended a solid wall “swirl barrier” every second or third pen to give calves something that blocks the wind. Some farms may use a type of storm curtain on open-faced buildings, and Tyson said those work well when they are used only in abnormal weather. Be sure to open them back up to prevent air blockage.

In longer calf buildings using natural ventilation, whether with individual or group pens, Tyson noted the same concern of drafts. He recommended placing pens 2 to 3 feet from the sidewall to move calves away from that spot and give the cool air a place to mix with the warmer air before it drops on the animals.

Positive pressure mechanical ventilation has gained popularity in recent years. Here, inlet fans create static pressure to distribute fresh air evenly through a series of tubes. The number and placement of tubes needs to be determined based on barn and pen layout. Tyson advised that these systems complete at least four to six full air exchanges every hour and noted that they cannot create a draft at the calf level. It must also allow pollutants to be circulated out of the building.

There are a number of potential threats to calf health early in life. A first-rate environment that’s designed well can help reduce many of those challenges, Tyson concluded.