The unanswered question of beef-dairy crosses 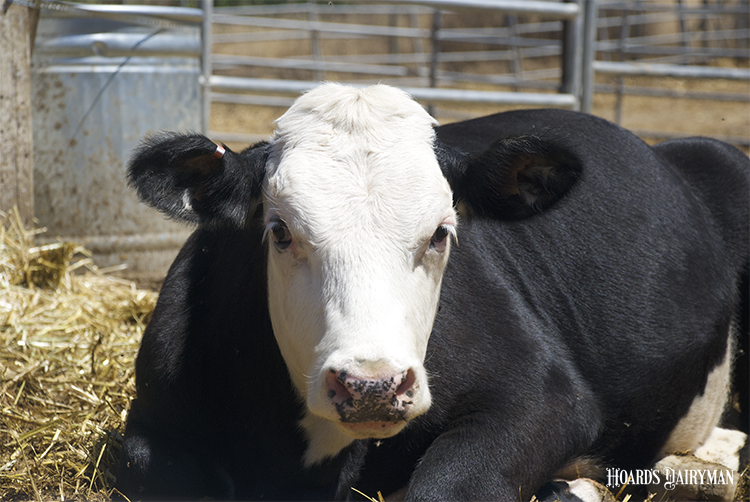 Compared to beef from straight dairy animals, and even in some cases, conventional beef animals, dairy beef crossbred meat has a lot to offer. Breeding in beef traits has helped create meat that is more desirable in steak shape and color compared to dairy steer steaks while maintaining the tenderness and buttery flavor that dairy meat provides. The genetic consistency of dairy animals is useful for packers adjusting their equipment to process these carcasses and end-users cooking the meat, and yield is typically strong.

Those are all good things to hear as more and more dairies make beef crossbreds as a way to rightsize their heifer inventories and maximize reproductive efficiency. But there is one concern that is keeping dairy beef crossbred animals from gaining more premiums and further acceptance with beef packers, and it was discussed at length during last week’s Dairy Cattle Reproduction Council Annual Meeting.

“These cattle are more predisposed to and are presenting more liver abscesses,” explained Dale Woerner, an animal and meat scientist at Texas Tech University, during the meeting’s opening presentation.

Liver abscesses are condemned at slaughtering, and they often adhere to the diaphragm muscles and other surrounding organs, requiring further carcass trimming. Woerner said the losses from these removed parts can reach $100 per head.

Liver abscesses are not unique to dairy beef crosses; they can be observed in any cattle breed. Typically, an abscess will be found in about 15% to 25% of conventional beef animals, and the prevalence in cull dairy cattle is about the same at approximately 20%, he described. While still not ideal, packing plants are prepared for this issue.

The problem is that dairy beef crosses are showing a much higher rate of liver abscesses, which becomes expensive and is not easy for a plant to absorb. These animals have about a 40% prevalence of liver abscesses, Woerner said. Some farms or feedlots may be at 80% or above. “We have doubled or tripled the incidence in these cattle,” Woerner said.

Unfortunately, there is not a clear answer as to why this is happening in these animals. Woerner noted that there is some speculation it could be because cattle raised in a dairy environment are fed grain from an earlier age. Another consideration could be heat stress, but there is not much agreement in that area due to conflicting reports of if there are actually more abscesses in animals fed out in the Southern part of the country.

Dairy beef crossbreds have come a long way in the last few years as dairy farmers have leaned on bull studs and other sources to choose beef bulls for their dairy animals that will make beef-quality — not just black — calves. Working to solve the liver abscess concern will be the next improvement that adds even more value to these animals born on dairy farms. At the moment, though, there are simply a million questions and not much good data on the topic, Woerner admitted.