Taking into account how judges actually evaluate during showmanship, the Purebred Dairy Cattle Association has improved its showmanship scorecard. 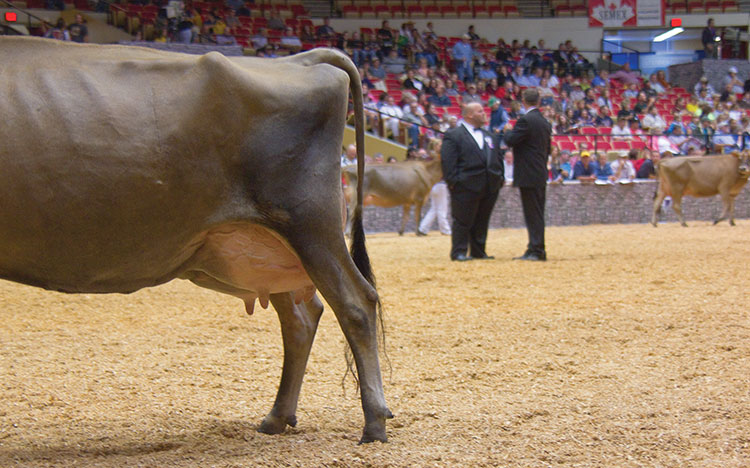 At World Dairy Expo, the Purebred Dairy Cattle Association (PDCA) voted to revise the PDCA Showmanship Evaluation Card. At the most recent meeting, the association noted, "We realized that judges are not going into the ring with a score' in their head. Instead, they check items off as the showmanship competition progresses. Among these items, there are things you can do correctly and things you do incorrectly; mostly "yes or no" questions.

What you need to know
The most important changes exhibitors should note are a step away from the traditional point breakdowns and the reclassification of some discriminations. Evaluation criteria are no longer grouped into the three major categories with point values: appearance of animal, appearance of exhibitor, and showing animal in the ring. In place of the factors to be evaluated and points breakdown, showmanship evaluations now will be categorized on three severities of discrimination for the exhibitor and animal: slight, moderate, and severe. Compliance with the criteria evaluated in these categories will be based on the judge's interpretation of the degree to which a problem was present.

Prefacing the new scorecard is a statement that covers the previous condition and grooming of the animal categories:
"It is important that participants in showmanship ensure that their animal is in proper body condition and growth based on the age of the animal. Horns are to be removed at an appropriate age to provide a safer environment for the leadsperson. Feet should be properly trimmed to promote ease of movement for the animal. These practices will show good husbandry skills of the participant as well as a positive image for the dairy industry."

When judging showmanship, the PDCA now recommends the following levels of discrimination, with some expectations being age appropriate.

Serious discrimination - exhibitor Exhibitors will be disqualified if they: The new scorecard also addresses how judges should evaluate toplines: The PDCA states the following regarding toplines in the Show Ring Code of Ethics, under the heading grooming and preparation:
"The maximum allowable length of naturally growing hair anywhere on the topline is not to exceed 1 inch. Exhibitors will be required to comply with this rule before the animal is allowed to enter the ring."

Awareness and avoidance of moderate to severe discriminations, along with practice and hard work at home, can help you place at the top of your showmanship class.

The new PDCA showmanship evaluation card can be downloaded. It contains the new guidelines outlined above.

This is the first article in a three-part series on the new PDCA showmanship scorecard.
It appears on page 172 of the March 10, 2012 issue of Hoard's Dairyman.
More in this showmanship series:
March 25: Aligning education and evaluation
April 10: Show whites and halters: What you need to do during showmanship