“Who do you think you are?” tapes at Oregon dairy

By Patti Hurtgen, Online Media Manager
On a spring day in late May, the phone rang at my family's dairy. A television show wanted to film at our location, as someone famous had relatives that previously owned the property.
Surprised by the call, my family did some checking on their credibility. The show was indeed reputable, so my family agreed to participate.

Upon agreeing, the name of the celebrity was shared with us, but we were not allowed to tell anyone until all taping and editing was completed in late summer. The well-known celebrity was an individual who my family had seen on television and they looked forward to meeting him. 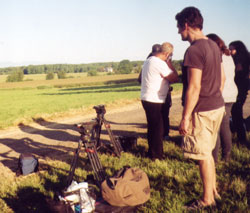 A caravan of cars and a crew of ten arrived on Sunday, June 1st in the late afternoon about mid-milking time. My mom greeted the guests. She watched for a bit as they prepared lights and cameras, and applied makeup to the show's feature, Kelsey Grammer.

Interestingly, his great-great-great-grandparents had settled in Monroe, Ore., on the property where my family farm, Hurtgen-Vue Dairy, is currently located. Monroe is a very small town between Eugene and Corvallis in western Oregon, an area known for its nearby wildlife preserve and world-famous grass seed.

Kelsey was taped talking about his heritage with the cropland in the background, which had recently been chopped for grass silage. A recent rain helped green the field and made a very lush backdrop. Milking was still in progress and the vacuum pump noise was creating some challenges. A crew member asked, "Could he turn that off for a while?" He was obviously not someone familiar with the importance of the vacuum pump during milking, but since milking was winding down my dad finished the few remaining cows and turned off the pump.

A few curious crew members did watch my dad milking cows and accompanied my brother to the calf barn for evening chores. When the crew asked about the ear tags. Richey replied, "Just as you are tracing Kelsey's family tree, those ear tags help us trace the calves' pedigrees back dozens of generations."

Kelsey felt a great connection to the land, even without ever knowing his family lived in Oregon prior to the show. He was fascinated with the old farmhouse (that is now uninhabited) just across the yard from the milking barn. "It was built with tree trunk stumps as the foundation," Andy told him. Kelsey wanted to see for himself and grabbed a flashlight and headed to the house to look for the tree stumps.

While not a farm boy himself, Kelsey acknowledged the hard work that dairy farmers do every day. "Kelsey was a very personable guy. We're glad we were able to help him experience some of his history. He's talked about coming back with his children to share it with them, too," commented Jean.

The "Who do you think you are?" episode featuring Kelsey Grammer will air on TLC (cable) on Wednesday, August 20 at 9:00 p.m. Eastern/Pacific and again on Sunday, August 24 at 7:00 p.m. Eastern/Pacific. The show takes participants on journeys across the U.S. to discover their ancestors and the larger historical context they lived in. Previews are being aired with Kelsey in the field. You won't see any cows but certainly some beautiful Oregon scenery. 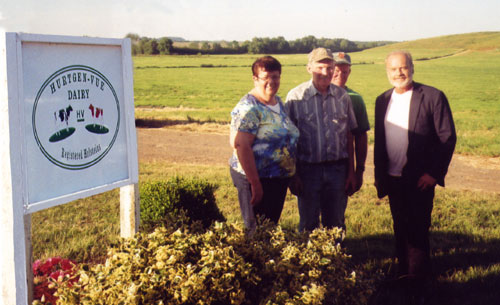 Pictured by the farm sign, Jean, Andy and Richey Hurtgen pose with Kelsey Grammer following the taping of his episode of "Who do you think you are?" at Hurtgen-Vue Dairy.