This year, it’s about Time

Judge Paulson selected his champion from the 225 Milking Shorthorns that were exhibited this year.

By Hoard's Dairyman staff   @hoardsdairyman
With no shortage of excitement, Judge Allyn Paulson, Arlington, Wis., chose the Grand Champion of the International Milking Shorthorn Show. As both feet left the ground, he brought his hand down upon the rump of Cates Ruben Tulsa-Time-EXP. Time was bred and owned by Peter Cate of Warren, N.H.

The cow from the Granite State stood at the top of the 4-year-old cow class, and was also chosen by Paulson to receive best udder honors. It's been a decade and a half since an animal Cate owned stood victorious on the colored shavings. 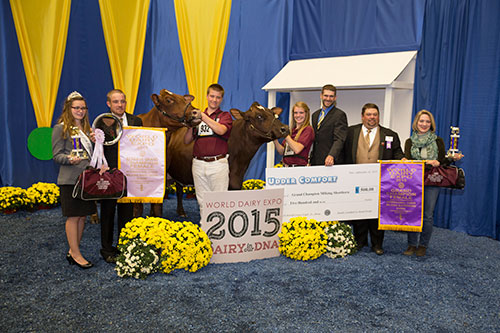 Amanda Smith
The author was an associate editor and is an animal science graduate of Cornell University. Smith covered feeding, milk quality and headed up the World Dairy Expo Supplement. She grew up on a Medina, N.Y., dairy, and interned at a 1,700-cow western New York dairy, a large New York calf and heifer farm, and studied in New Zealand for one semester.
Related