It was the first time in the 127 year-history of the Rose Parade, the California Milk Advisory Board (CMAB) had a float entry. The organization represents the state's dairy farmers. The pizza, baked potato, ice cream sundae and grilled cheese sandwich-inspired float earned the "Tournament Special Trophy" for exceptional merit in multiple classifications. Just 24 floats in the parade earned honors. 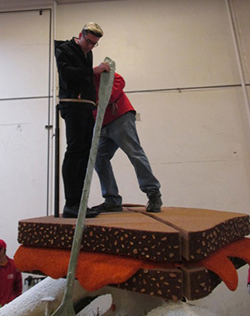 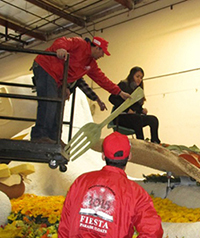 Jordan Dunn gets ready to ride the grilled cheese, while Karleen Lopez gets comfortable in a seat on her pizza slice.

Along with the bright and fun decorations, the float featured the future of the nation's largest milk producing state. Young people who are members of dairy youth organizations with a strong interest in dairy earned a spot on the float after entering a statewide contest. The float riders included high school and college students Jordan Dunn, Karleen Lopez, Natalie Massa, Katie Migliazzo and Makenzie Neves. 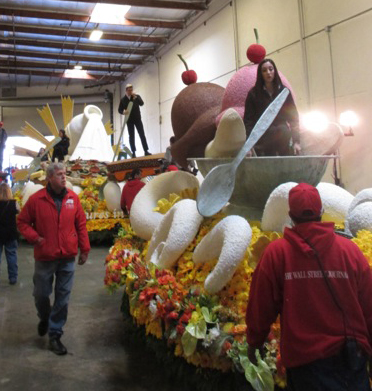 This float is not like a high school homecoming parade float – decorating a trailer with paper machete, palm trees and cardboard signs. And, instead of taking a few days to construct, the January parade entry had been in the works for months. In the Rose Parade, each float must be constructed by an approved float builder and all visible parts of the float must be covered by natural material that can include flowers, seed, bark, leaves or grass. Fiesta Parade Floats built the CMAB float in a huge warehouse alongside "The Bachelor" and Dole float (a perennial design winner) and six others. According to the Tournament of Roses website, the cost of construction and design for a float are estimated at $250,000.

Watch the time-lapse video below:

When I heard CMAB had a float, I made sure I was tuned into the parade at the designated time for its debut. But, as I watched, I was also preoccupied doing other household tasks, but then I heard a voice – a familiar one – and I listened more intently. It was the CMAB "Return to Real" campaign commercial with Kirsten Areias' voice. I knew it sounded familiar! Kirsten and her husband operate a registered Holstein dairy in Los Banos, Calif., and she coaches the California dairy bowl teams. For 90 seconds, this dairy wife talked about the farming families of California that produce wholesome products that all families can enjoy. While it wasn't Paul Harvey's voice reading "And God Made a Farmer," it was very natural and had a "we really care" feel as it promoted the variety of dairy products and the 1,400 California families that produce milk everyday. 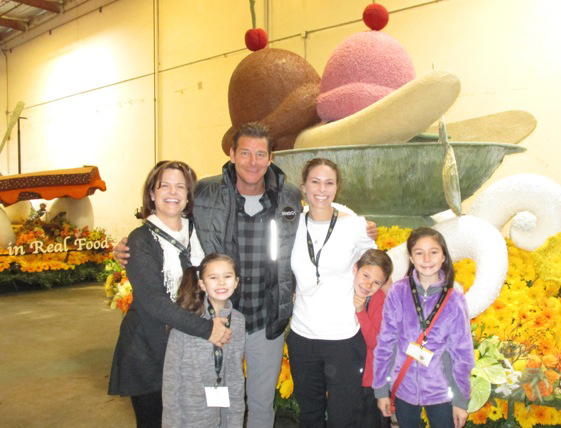 Kirsten did a short phone audition for the voice over and was selected as the voice for the 90-second spot. Watch below

With the float and the commercial as early 2016 successes, we can look forward to more "Real food from real people" ideas this year.