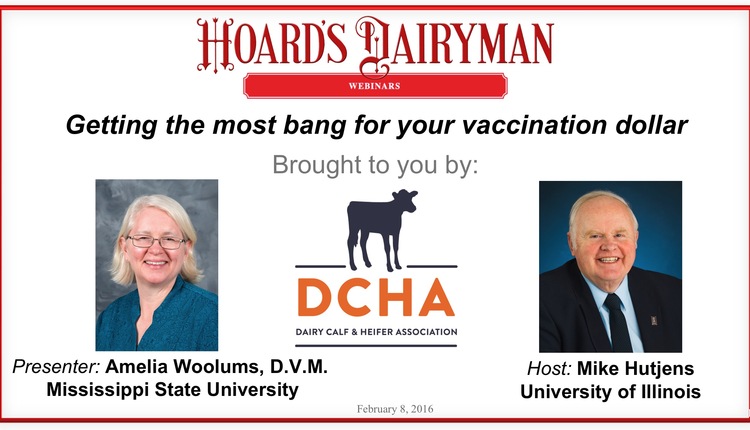 Vaccinations are designed to stimulate the immune system. They aren't cures, but tools to help the calf defend its body from viruses, bacteria and parasites. The ultimate goal is calf health.

At birth, calves are born without immunity and that's why colostrum is so important. The valuable antibodies it supplies sets the stage for health and growth and, later, milk production. But colostrum alone is not enough.

Amelia Woolums, D.V.M., presented the February webinar titled, "Getting the most for your vaccination dollar." It included an overview of how vaccines work and recommendations on how they should be used.

The immune system has innate responses, which are naturally present. There also is acquired immunity. This form needs several weeks to be fully active. When animals create immunity, their system remembers the exposure and creates a "memory" of the invader and is therefore equipped to fight that pathogen in the future.

The animal's immune response has two components. The B cells produce the antibody while the T cells kill the infected cells. When we vaccinate, the desired response is to make more B and T cells in the body. When a calf is later exposed to the infectious agent, the calf's body recognizes the invader and is ready with B and T cells.

Vaccines can be used in calves as well as cows, but the immune development is slower to develop in calves. The newborn calf's is functional, but it's immature.

Studies show that 19 percent of calves fail to get enough colostrum. Those calves are at higher risk for developing disease, death and less likely to reach their full potential. Using vaccination helps those calves, as well as calves with adequate passive transfer.

Vaccinations can be ineffective for several reasons. The modified live vaccine (MLV) needs to be given very soon after being reconstituted. If not, they become inactive. Also, exposure to sunlight and higher temperatures renders them inactive as well.

Vaccinating followed by a booster significantly charges the immune system. However, giving a vaccine after an animal has signs of the disease is too late. It should be given at least two weeks prior to an anticipated stressful event, such as weaning, transportation or being moved to group pens.

When calves receive adequate colostrum and are vaccinated soon after, the maternal colostrum immune response may block the vaccination benefits. In effect, you could be wasting your vaccine.

Additionally, if the animal was sick or getting a low level of nutrition, the vaccine may not be as effective. Overcrowding and poor ventilation also hinder immunity.

Woolums stressed the importance of having a strong relationship with your local veterinarian. They are most familiar with the likely pathogens to surface in your herd.

Learn more about vaccinations and recommendations by watching the webinar, which was brought to you by the Dairy Calf and Heifer Association (DCHA).

Where is the sweet spot?
By Patti Hurtgen, Online Media Manager