Type and production are partners in extreme production

By Patti Hurtgen, Online Media Manager
Last month it was announced that Bur-Wall Buckeye Gigi produced 74,650 pounds of milk. That equates to 8,680 gallons of milk and set the single lactation milk production record in one year of production. She eclipsed the previous record holder by over 2,000 pounds. Gigi is bred and owned by the Behnke Family of Brooklyn, Wis. 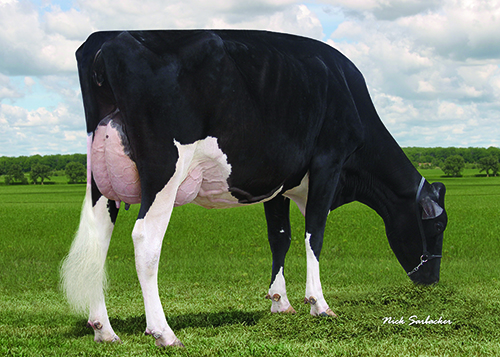 For the last 45 years, Holstein Association USA has tracked its milk production leaders. In that time span, 12 different cows have held the title. They came from farms as far apart as Washington to New Hampshire.
Type:
Gigi is the second-highest classified cow at EX-94 to hold the title. Robthom Suzet Paddy at EX-95 is the highest. Overall type and extreme production is closely tied in this elite list. Seven of the leaders have classified Excellent (above 90 points), four were Very Good (85 to 89 points) and one at Good Plus-83.

The Owners:
And while New Mexico leads the nation in milk per cow, it is Wisconsin that rises to the top when you are talking about extreme milk production per cow, with four on the list – and the most recent ones. The Baumann Brothers in Marathon, Wis., have owned two of the leaders, Twin-B-Dairy Aerosta Lynn and Muranda Oscar Lucinda-ET. The most recent holder was Ever-Green-View My 1326-ET owned by Tom Kestell of Waldo, Wis. Colorado is the only other state with multiple cows and their back-to-back honors preceded Wisconsin's reign.

Of the past twelve record holders, only two ever left their home farm, the remaining 10 were still owned by the farm that bred and raised them.

The Sires:
Realizing that older cows have the best chance of breaking the record, you would expect their sires to be older as well. With age comes the greater likelihood that their genetic transmitting ability would be lower than current top milk sires. Not one of the sires has a current Predicted Transmitting Ability (PTA) over 1,000 pounds. In fact some of the oldest bulls have a current PTAM of -3,745.

While California is the nation's top milk producing state, they have not had a national milk production leader. However, California-bred Lekker Valiant Royalty sired two of the leaders, Bell-Jr Rosabel-ET and Tullando Royalty Maxima.

Three of the leaders were sired by homebred bulls and from cows bred by the same farm. (Two were herd bulls with no official production data.) Those double-sided pedigrees were from the breeding establishments of Robthom, Mowry and Skagvale.


Other blogs relating to breed news can be found here.