Red and Polled are gaining popularity!

The top seller at the National Red & White Convention Sale was both red, polled, and from the Roxy family. Held last Saturday, July 23, the national sale had over 100 lots sell for an average of $3,900. (unofficial) The top seller was Golden-Oaks Perk Rae-Red, an 8th generation Excellent donor cow that has exported embryos world-wide and continues to be a very prolific embryo producer. For $20,000, Adolf Langhout of the Netherlands will keep Perk Rae-Red at Sunshine Genetics in Wisconsin and export her genetics around the world. With Perk-Rae, five Balti-Red embryos went with her. (Balti is also polled). From another branch of the Roxys, was the second high seller, Schultz Farm L Regal-Red-ET. She's a Lion King donor heifer, due in January, with AI interest, and carries a GTPI of +1900.

The very successful sale featured a variety of red genetics–show type, genomics, polled, cow families (black and red), but of particular interest was the growing number of polled genetics available in the red breed. As more polled carriers are mated to leading sires in the Holstein and Red & White breed, more opportunities will be available for polled genetics to infiltrate the mainstream pedigrees of the breeds.

The Grand Champion of Thursday's show was a Sr-3-Year-Old, TJ-Pollema Redliner Shania-Red, exhibited by Brooke Pollema and Quintin Scott. Both are junior members, and their family herds were tour stops on Friday, TJ-Pollema and Starlight Acres. Kara-Kesh Cntndr Spark-Red was the winning Fall Yearling and Junior Champion for Ryan Griffin of Thief River Falls, Minn. Robert Yeomans of Oklahoma judged the show.

A welcome dinner was held at Melarry Farms on Wednesday evening. The next morning, the hosts, Melarry Farms and Scott Culbertson exhibited the Reserve Junior Champion of the show, Melarry Advent Dutch-Red. Other farm visits included Thursday's social at Skaj's Hilltop Dairy.

When members of an association reinvest in the membership, everyone benefits, whether it is participating in association activities, hosting a tour, or donating to association. Here are some of the award winners from Friday night's banquet, who all have reinvested time to the association and a commitment to breeding quality Red and Whites. 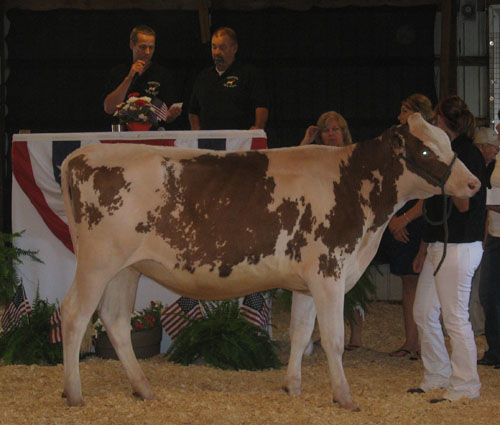 The wining ticket is drawn for raffle calf, Scha-Way Haven Emma-Red
Youth promotion was given great importance. Tickets were sold for a raffle calf with funds to go to the scholarship fund. The calf, Scha-Way Haven Emma-Red, was from Starlight Acres of Little Falls, Minn. The membership voted to contribute funds from the 2010 association profit (general fund) to the scholarship fund. In addition, with Hoard's Dairyman's 125th anniversary last year, we donated two prints of the new Foster Mothers of the Human Race to each breed association for their youth programs. This Foster Mothers print that was especially remarqued with the Red & White cow head at the bottom of the artwork by Bonnie Mohr. It sold for $650 to Ray and Kelly Van Der Wielen of Canada.

The 2011 National Red & White Convention was hosted and organized by the Minnesota Red & White Club and their volunteers. Despite the warm weather, attendees enjoyed Red & Whites Under the Northern Lights. Next years convention will be in Listowel, Canada August 13-16, for the Me & You at the Rendezvous II.