The tradition of dairy twilight meetings

Where dairy farms are plentiful, the tradition continues. 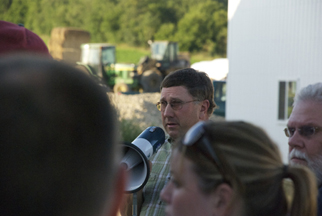 Bill Barlass explains some plans for the future to the crowd during last night's twilight meeting at Barlass Jerseys.

If you live on a dairy farm, you've probably been invited to a twilight meeting. There is no tradition that screams Americana more than seeing your neighbors, judging some cows, and consuming dairy products.

Our staff has attended plenty of twilight meetings over the years. Along with the food, fun, and friends, some sort of serious program is usually delivered. In a low milk-price year, it might be a new milk policy pitch. In a high milk price year, it might be a salesman explaining the latest and greatest feed additive. No matter the weather, the program, or the food, twilight meetings are just one more fun thing that dairy farmers get to do. Most people don't.

We're different
Do you ever stop and look around at an agricultural event? We're pretty special. Very few are afforded the opportunity to learn from their competition.

Yes, other industries have trade shows. But very few are able to take a no-holds-barred approach during their tour. Coke and Pepsi may see each other at plenty of events throughout the year, but I would guess they don't share their secret formula. That's not the case in much of agriculture, and especially the dairy industry.

Last night, we attended the Professional Dairy Producers of Wisconsin (PDPW) twilight meeting at Barlass Jerseys, near Janesville, Wis. As usual, we received a full tour of the farm, were fed pie and ice cream, and even had the chance to win door prizes (though somehow, we went home empty-handed).

Consumers are different, too
But this was a different kind of twilight meeting; the target was consumers, elected officials, and decision makers. Unfortunately, not many showed up and the consumer-driven agenda ended up speaking to a mostly "home" crowd. However, we think this is a good approach. Consumer perception is probably one of the biggest challenges for the future of our industry.

We have no secret formula for getting consumers to attend an event, but we hope events with a similar agenda are continued. PDPW has two more cracks at the bat tonight (Harmony-Ho Holsteins, Stratford, Wis.) and Monday (Junction View Dairy, LLC, Richland Center, Wis.). We hope the producers in those areas attend and also call five of their in-town neighbors, offering to give them a ride.

A showring recap from a 4-year-old
HD Notebook
Related to:
HDN, agvocacy
In HD Notebook