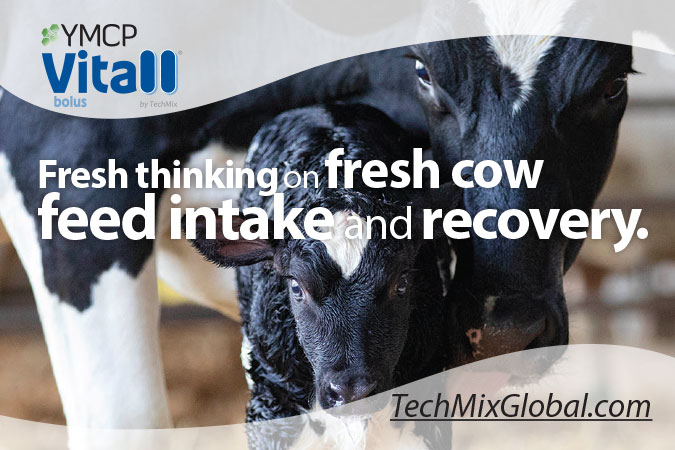 Fresh cows are the most vulnerable animals in your operation. Giving them a good start after calving profoundly impacts both short-term and long-term herd profits.

As they transition to lactation, nutritional requirements for fresh cows soar while their dry matter intake is low. In addition, demands on body fat and energy reserves are high. Health and metabolic issues such as retained placenta, udder edema, milk fever, displaced abomasum, ketosis, and fatty liver syndrome are rampant.

The loss of nutrients and trace elements such as calcium, magnesium, and potassium for dairy cows after calving has been well documented. Because most metabolic issues occur within the first two weeks of lactation, it is important to quickly provide supplemental trace elements.

Calcium chloride represents a source of highly soluble calcium and has a 95 percent absorption coefficient. Another approach to prevention of hypocalcemia is oral calcium supplements around calving. A study in the Journal of Dairy Science discusses how calcium chloride may be particularly beneficial as an oral supplement because it is a more potent acidifier than other anion sources.

Active dry yeasts are increasingly used in ruminant nutrition as feed additives to improve feed efficiency and performance and, at the same time, to prevent health disorders. Animal science studies have shown them to be particularly useful in high-producing ruminants whose digestive microbial balance can be altered by high dietary energy input. Overall, the results show live yeast supplementation tended to improve meal patterns and rumination, rumen temperature, and milkfat production.

Another important factor influencing dry matter intake of fresh cows is jump-starting the rumen mucosa and papillae, in both length and texture. This is important, as papillae typically lengthens and increases its surface area for absorption after calving. This, in turn, leads to the absorption of various nutrients required for energy and, ultimately, milk production.

Minimizing treatment and the time spent managing fresh cows can be costly. Getting fresh cows off to a good start is critical. The question is how to get fresh cows drinking, eating, and producing more quickly. This is best accomplished by recognizing the importance of replacing lost nutrients and trace elements and by stimulating the development of fiber-digesting bacteria in the rumen to increase energy.