Book review: A Rat is a Pig is a Dog is a Boy

A Rat is a Pig is a Dog is a Boy: The Human Cost of the Animal Rights Movement is a fascinating book by Wesley J. Smith. Agriculturalists should know more about the people trying to put them out of business, and this book helps educate about the methods a 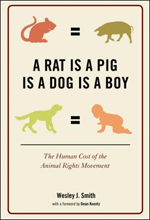 Author Wesley J. Smith reminds us that "animal rights" is not a term to be used loosely. Although it has quickly seeped into our Western way of life, Smith lays out many reasons to fight back. The most important reason is our own human dignity.

Smith is a lawyer by trade and digs deep into the details of the animal rights movement. This includes their public manipulation and propaganda schemes, endorsements from celebrities who think they're helping, and, in the worst case scenario, terrorism against humans. "A rat is a pig is a dog is a boy" is a quote from Ingrid Newkirk, one of PETA's top staff.

Interestingly, Smith points out that the animal rights movement is a product of just the past 40 years. Smith fights back with reason after reason why the animal rights movement is not a good path to follow. He is careful not to paint a broad brush of all activists, but at the same time notes the very close links between the "mainstream" animal rights groups (People for the Ethical Treatment of Animals and the Humane Society of the United States) with those who have no problem committing terrorist acts (Animal Liberation Front), among others.

At the base of Smith's argument is that a human life should indeed be worth more than an animal's life. That's not to say that animals aren't very important to us, or that we shouldn't treat animals with dignity. But when we give animals rights that were previously reserved only for humans, like the right to sue humans, respect amongst other humans will be lost.

While everyone should read this book, it is especially important for the agriculturalists among us. The nuggets of information provided within will pay dividends in our future conversations and debates, whether they are domestic or statutory.