Based on anecdotal exit polls, the Guernsey calf may have been helped by anti-Jersey sentiment, rather than actual Guernsey love.

Hundreds of votes are in from all over the world; in a landslide election, our Guernsey calf beat our Jersey with a final tally of 55.6 percent to 44.4 percent at 8 a.m. After the polls officially closed, the Jersey calf began to battle back.

Obviously, the race came down to the swing states. In this case, as Ohio went, so went the country. With headquarters for both the Jersey and Guernsey camps, we expected more of a race. But Guernsey overtook Ohio by a 2-to-1 margin over Jersey.

Canada went Guernsey, as did Mexico, the United Kingdom, Australia and Japan. The Jersey calf triumphed in New Zealand, Singapore, Holland and Kenya.

Pro-Guernsey calf, or anti-Jersey sentiment?
As with all contentious elections this year, we never know if people are voting for a candidate, or just against one they vehemently disagree with. Of the dozens of comments received, nearly 15 percent mentioned a breed not even competing in this election (Holstein, Brown Swiss and Normande).

Others used slang terms like "Guerndogs" and "Swamp-goats" to describe the breeds, leading us to believe that those who did not own Guernseys or Jerseys were simply betting against their least favorite breed.

Now that the campaigning is complete, the Guernsey calf out of Grumpy will be on its throne until the next election. Votes spanned over 35 states and 5 of the 6 inhabited continents (South America had no votes) in just 20 hours time. 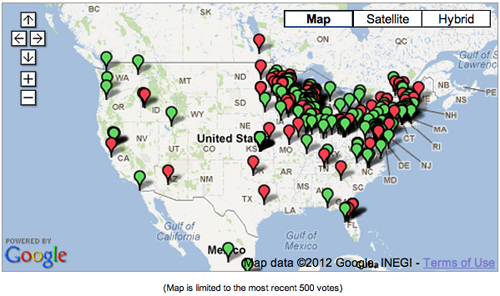