Lust-ing for the Grand Champion title 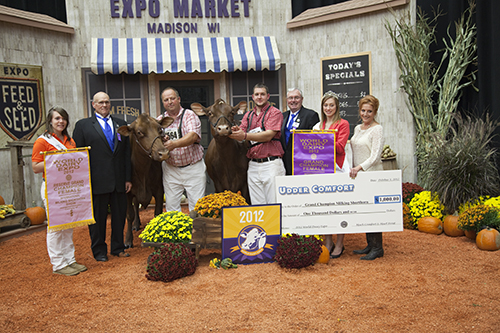 The Nasco Type and Production Award was won by Tex-Star Othello Peri, owned by Springville Farm of Emory, Texas. Peri was Grand Champion of the show in 2010.

Innisfail of Orland, Calif., was named Premier Breeder of the show.

In the Junior Show:

The Tuesday afternoon and Wednesday morning show was judged by Steve White from Indiana and Associate Judge Ken Empey from Ontario, Canada. They placed 196 cattle at the International Milking Shorthorn Show. It was the first time in World Dairy Expo history that two Klussendorf winners judged the same breed in the same year.
Related