What’s in a name?

What do those in dairy production prefer to be called?

By Patti Hurtgen, Online Media Manager
As the landscape of the agricultural farmstead has changed from red barns with a variety of livestock and two-story white farmhouses to more single-focused livestock operations, have the words we use changed as well?

A little while ago, an Iowa State University rural sociologist conducted a survey about what those in the state's production agriculture fields (food, feed, fiber and fuel) wanted to be called.

They were given the choice of: Then they were asked to select the one that they felt best described them. The top answer from 60 percent of those polled was "farmer." "Producer" and "farm operator" tied for second with 18 percent. Three percent of the respondents preferred "grower," while one percent selected "rancher."

While this poll was taken from broad-based agriculture in Iowa, would the dairy industry have similar word choices? 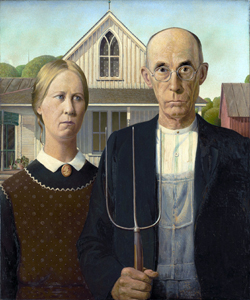 Farmer. Many of us learned as students in school that a farmer was the guy who grew crops and fed animals. The portrait, American Gothic shows a couple, he's dressed in work clothes with a pitchfork and she's in a proper dress. While present, the female was rarely thought of as the farmer. She was the farmer's wife.

My grandfather milked cows, raised sheep and grew crops. He was a farmer and lived on a farm. One generation later, my dad has a dairy operation and purchases all of the feed for the animals. It is just the cows and calves, no crops and no other enterprises. Growing up and still today, it feels odd to call my dad a "farmer." He is a dairyman and I was raised on a dairy.

As times have changed, more females have taken prominent roles in dairy production. As owners, are they dairymen? Most would argue that they are not "men" and therefore are dairy "women." Collectively, those who are owners and operators of dairy cattle could be called dairymen, but maybe "dairy producers" is a better way to characterize them all as a group.

As men in the industry on the same ownership and decision-making levels as their female counterparts, do they use different vocabulary than others to describe the females in the industry? In an attempt for the public to be politically correct, does the respect women have earned in the workplace get diminished when someone has to be cognizant of using the gender-specific descriptor to describe an equal? Is the female who leads a committee addressed as a chairman or chairwoman?

As a female in the industry, I would be comfortable being called a farmer, a dairy farmer, a dairyman, a dairywoman or a dairy producer when my only employment was the dairy. But that is probably due to the close association I have with my earlier generations and the respect for their livelihoods. Maybe it is because I was raised in the West, where "farms" are less common. I am not writing this to change people's word choices, but more so to better understand them. I am not, and cannot, speak for all.

We have a short poll of our own to see what terms you use for today's dairy industry people. While not scientific, it might shed some light on current jargon use.

In advance, thank you for your input and look for the results in an upcoming blog.
Related