Across the four monitored milk-marketing orders, a 5.9 percent drop in somatic cell count was achieved.

The data comes from the four federal milk marketing orders (FMO) that report BTSCC. These include the Central, Mideast, Southwest and Upper Midwest. These four orders monitored milk from 28,274 producers located in 31 states. The data also accounted for 94.8 billion pounds, or 47.4 percent, of the 200.3 billion pounds of milk produced in the U.S. in 2012. In total, 309,343 milk shipments were monitored.

This milk weighted BTSCC takes into account the amount of milk shipped by a producer, resulting in an overall BTSCC mean of monitored milk. The producer shipment BTSCC (the geometric, nonmilk-weighted mean of all shipments) dropped from 259,000 cells/mL in 2011 to 230,000 cells/mL in 2012. 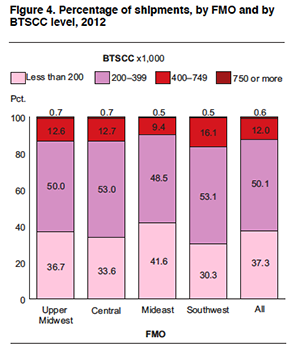 BTSCCs for all monitored orders combined have fallen every year since 2007. With the exception of the Southwest order in 2010 and 2012, milk-weighted BTSCCs have also dropped in each order since 2007.

Fifteen states marketed 60 percent or more of the milk produced in their states through the monitored orders and accounted for 95.3 percent of the monitored milk in the four orders. Thirteen of these 15 states had lower BTSCCs in 2012 compared to 2011.