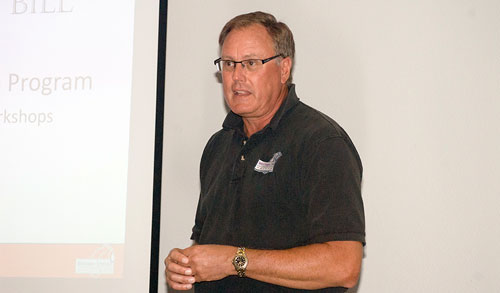 The board of directors of California's largest dairy producer lobbying and advocacy organization has dismissed its Chief Executive Officer.

The surprise move on December 19 by Western United Dairymen (WUD), headquartered in Modesto, ended the 15-year tenure of Michael Marsh (pictured above), who had served as the group's public face on both state and federal legislative matters affecting the dairy industry.

WUD is a voluntary membership organization representing approximately 800 of California's 1,500 dairies, which account for about 60 percent of the state's milk production. WUD is particularly active in matters involving labor law, environmental regulations and milk pricing.

Both sides declined to give any details about the dismissal, and no other staff changes were made. WUD's only announcement was this 29-word statement by WUD President Tom Barcellos on December 21:

"I am disappointed to announce the end of Michael Marsh's tenure as CEO of Western United Dairymen. We appreciate his leadership and wish him well in his future endeavors."

Marsh's photo and biography had been removed from the WUD website by December 22.

The change comes at what figures to be a busy time for the organization. The 114th U.S. Congress will convene on January 6, with immigration reform expected to be a high priority. In addition, the first of WUD's 12 annual district meetings across the state will be held January 8 to gather member input in preparation for its annual convention March 18 to 20.