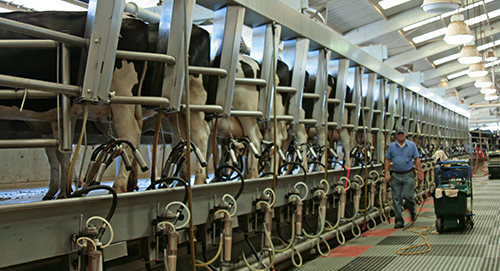 With another new year underway, California continues to be the largest dairy state by a wide margin, accounting for over 20 percent of all milk made in the U.S.

Its dairy industry continues to have much on its plate, says Rob Vandenheuvel, general manger of Milk Producers Council (MPC) in Ontario, Calif., a 60-year-old nonprofit organization representing member dairy families on a diverse range of local, state and national issues.

"Turning a new calendar page did not erase the old issues we have been dealing with, that's for sure," he says. "There is no end to the number of challenges we have. You need to put our pricing system at the top of the list, because it's the thing producers have the biggest opportunity to address.

Vandenheuvel says record milk prices tended to push the industry's effort to implement a Federal Milk Marketing Order (FMMO) onto a back burner in 2014, but he thinks changing global markets and falling milk prices have pushed it back to the front this year.

"The cooperatives are leading that project, but everything I'm hearing says we are very close. By that I mean, it could be several days or weeks, not several months.

"That request will start a process that will lead to many days of hearings and discussions involving everyone in our industry. Because of what the state has gone through in the past, I would anticipate the process to be a very robust one in terms of producer involvement," he predicts.