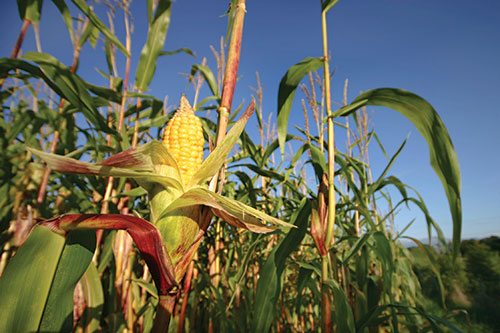 Avoid corn that is too dry when harvesting and storing high-moisture corn that will be later fed as starch to the milking herd. When corn kernels are below 24 percent moisture, it can take as long as three months to complete the fermentation process.
High-moisture corn, whether ensiled as shelled corn, ear corn or snaplage, is a popular, yet sometimes challenging crop to ensile. One of the primary challenges is that corn kernels are low in sugar content. Sugar, rather than starch, is what lactic acid bacteria prefer to convert to lactic acid to lower pH and preserve the crop.

High-moisture ear corn and snaplage are usually easier to ensile because the cob contains additional sugar that can be utilized by the fermenting bacteria. The good news is that high-moisture corn has a very low buffering capacity and is low in moisture, so not that much lactic acid is needed to achieve a low pH. For comparison, researchers have observed that 1.5 percent lactic acid in high-moisture corn can produce the same terminal pH as does 7 percent lactic acid in a wetter, high buffer crop like alfalfa silage.

At kernel moistures below about 25 percent, reduced compaction and higher oxygen penetration results in lactic acid bacteria having a more difficult time growing. However, any yeast, mold and bacillus (compost bacteria) on the crop now enjoy a competitive growth advantage under aerobic conditions which can lead to heating and poor bunk life. The fact that high-moisture corn is typically loaded with yeast leads to the second major ensiling challenge for this crop.

Sugar-utilizing yeast dominate during the beginning, aerobic phase, of the ensiling process. Heat, carbon dioxide and acetic acid (vinegar) are the main products produced by yeasts under aerobic conditions. Heat and its secondary effects can affect palatability, and carbon dioxide contributes to energy loss.

As fermentation proceeds, declining pH induces selection pressure, and most of the yeast that grow when high-moisture corn is exposed to oxygen at feedout are lactic acid-utilizing yeast. High counts of Hansula or Candida yeast at feedout usually cause spoilage and bunk life problems as they metabolize lactic acid which raises the pH and allows for the growth of spoilage molds and heat-generating bacteria.

Yeasts do not reproduce during anaerobic conditions, but they remain metabolically active, producing heat, carbon dioxide, ethanol and by-products including acetic acid, aldehydes and esters. However, when exposed to oxygen at feedout, lactic acid-metabolizing yeast do reproduce (but not as fast as bacteria), explaining why low-moisture, poorly compacted and slowly fed high-moisture corn often displays very high yeast (and aerobic bacillus) counts.

Off flavors too
Besides acetic acid and limited amounts of ethanol, aerobic conditions also cause yeast to produce a large number of aromatic compounds, especially when ambient temperatures rise. These aromatics include fruity smells (esters), fingernail polish smells (ethyl acetate), solvent smells (fusel alcohols from amino acid degradation), and butter or green apple smell (aldehydes and acetylaldehydes) which not only heighten dry matter loss but significantly contribute to palatability problems.

From a diagnostic perspective, unstable high-moisture corn usually have yeast populations that exceed 100,000 colony forming units per gram of ensiled feed. Higher levels of acetate should not always be considered problematic or evidence of high yeast contamination. Elevated acetic acid levels can also be caused by gram-negative bacteria (such as enterobacter sp.) or hetero-fermentative lactic-acid bacteria (such as leuconostoc sp.) which also contribute to poor palatability and bunk life issues. High-moisture corn treated with bacterial additives containing strains of Lactobacillus buchneri also exhibit lower lactic:acetic acid ratios, yet have been shown to significantly reduce yeast counts, improve bunk life, and cause no negative impact on dry matter intake.

Some soybean meal may under deliver on protein
Features
Related to:
features
In Features

Some soybean meal may under deliver on protein
By Bill Mahanna, Pioneer