We had to make a better pizza

Dairy Management Inc., via the dairy-farmer checkoff, provided the shot in the arm that not only turned around Domino's, but the entire pizza category. 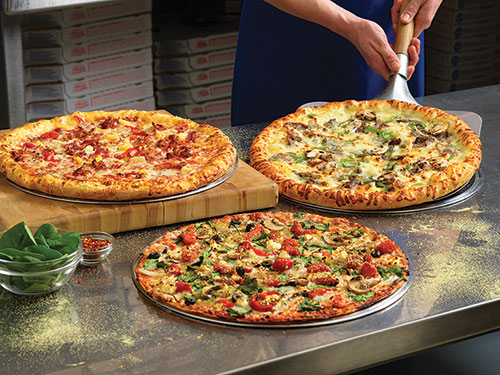 
Those would not have been the thoughts from the Ann Arbor-based international pizza chain back in 2008. At the time, Domino’s innovation plan focused on taking ingredients from the pizza-making line and selling those as additional menu options. In the process, the company was drifting away from its core — pizza — in an effort to shore up its bottom line.

“We brought the focus back to our core, pizza,” said Jordan. “At one time, you saw us promote other foods (new offerings). That will not happen again. Pizza will be a part of every promotion as long as I am chief marketing officer,” stated Jordan, who previously worked with PepsiCo.

The first drop in Mozzarella

Dairy had a big stake in the matter, too, not only Domino’s. Prior to 2008, pizza accounted for 25 to 28 percent of all cheese consumption nationally in any given year. And with already stumbling pizza sales and a sluggish 2008 economy, Mozzarella — the main cheese on pizza — fell nearly half a pound in per capita consumption compared to the prior year. Up until that point in time, Mozzarella sales had been on a constant growth trajectory.

Focus groups and listening sessions with customers, deep conversations among employees, and a long, hard look in the mirror all led Domino’s leaders to the same conclusion — the international fast food chain had to make a better pizza. That entire introspective may not have taken place had it not been for engagement from dairy farmers via their national check-off run by Dairy Management Inc. (DMI). While DMI provided the catalytic seed money to set change in motion, it still took the collective Domino’s employee team to transform its pizza and its culture.

There is exactly one U.S.-based restaurant chain with over 2,000 stores that can boast seven consecutive years of sales growth — Domino’s. There isn’t another chain that can hang its hat on even a six-year trend among the major players. It is no coincidence that the growth trend started the very first year after the DMI-Domino’s joint partnership.

DMI put $1 million into the partnership, while Domino’s invested $4 million the very first year. The ratio has changed over the years as Domino’s developed moxie and swagger in the marketplace. Since then, overall cheese use on pizza has grown 43 percent.

“Our growing investment in this partnership is in proportion to our growing pizza sales,” said Jordan. “Through the entire experience, we found it matters what we deliver at the end of the day. What we must deliver is great pizza because consumers relish the complete pizza experience.

“The Domino’s-DMI partnership was a natural fit as we have so much in common,” said Jordan, recalling the earlier days. “Nearly all dairy farms are family owned. At Domino’s, 90 percent of 850 franchisee owners started at the grassroots level and worked up to restaurant ownership,” said Jordan, noting that the average franchisee owns six stores. “Just like dairy farmers, we are open for business nearly every day, only closing three days a year,” he said.

Once Domino’s made its pizza experience better, it then could focus on improving engagement with consumers. Just as with reinventing its pizza, the organization’s engagement with consumers has been a continual journey. So much so that JP Morgan restaurant analyst John Ivankoe stated, “Domino’s is a technology company disguised as a marketing company disguised as a pizza company.”

These days, Domino’s offers one-click ordering. That’s correct. Download the mobile phone application, known to most of us as an app, and the Domino’s smart software will remember your favorite pizza. Just how important is this feature in the growingly digital world?

“Earlier technology rollouts included DOM, a voice-controlled pizza ordering device,” said Jordan. “This was the first voice recognition commerce program in the marketplace. Our goal was simple: Let’s make it super easy to order pizza and take the friction out of the process.”

Talking technology is one matter. Does it actually work?

The Domino’s app has an 85-point score on the Applause Application Rating Center (ARC) rating system. That leads all applications across all industries. That’s higher than digital mastermind Amazon’s 54 rating and Apple’s 51 rating, just to name a few.

As Domino’s technology improved, so did its pizza sales.

“We were consistently able to ask customers for additional pizza toppings. One of our best three performing upsells has been ‘extra cheese.’ It has more than doubled,” said the marketing specialist.

In further embracing technology, Domino’s also rolled out a rewards program called “Piece of the Pie Rewards.” Customers can earn 10 points per an online order of $10 or more. Once a customer earns 60 points, he or she can get a free medium two-topping pizza. The program is available only for digital purchases. It’s the use of this technology and digital platforms that helped propel Domino’s sales growth 12 percent from 2014 to 2015.

A look over the fence

Just as a growing consumer segment wants to witness modern-day dairy farming, the same holds true for consumers and their pizzas. While Domino’s has long been the market leader in delivery, carry-out pizza represents a rapidly growing segment.

To meet that growing consumer interaction, the nimble Ann Arbor-based company tested out new stores in the Seattle, Wash., market. The modern storefronts, with glass partitions inside, give customers a clear vantage point of pizza making. So successful was the Seattle test market that the majority of all U.S. and international stores will be reimaged by the end of 2017.

As this innovation has taken place, Domino’s also developed a pizza delivery vehicle.

“There are milk trucks, there are ice cream trucks, why not a pizza delivery vehicle?” said Jordan, recalling an earlier discussion with Russell Weiner, president of Domino’s USA.

That’s when the organization developed the Domino’s DXP, a Chevy Spark designed exclusively for pizza delivery. It features the capacity for 80 pizzas and all the accommodations to be a leading pizza delivery specialist.

“The car has been a hit,” said Jordan. “We sold 100 instantly at its unveiling this year, and we now have orders for 50 more.”

“Since its introduction, sales have steadily grown from $2 million to $28 million,” said Jordan. “That’s the equivalent of sales from 30-plus store locations.”

If copying is the sincerest form of flattery, then the Domino’s-DMI efforts have accomplished its goal of a “catalytic impact” as other national pizza chains have followed Domino’s lead on its mix-and-match promotions and its quality guarantee.

“DMI brought the focus back to food,” said Jenny Fouracre, director of public relations. “It is no longer difficult to talk about food as we are getting that right.”