Taco Bell once viewed cheese and sour cream as a garnish on its food. Today, it realizes that dairy enhances the entire eating experience. 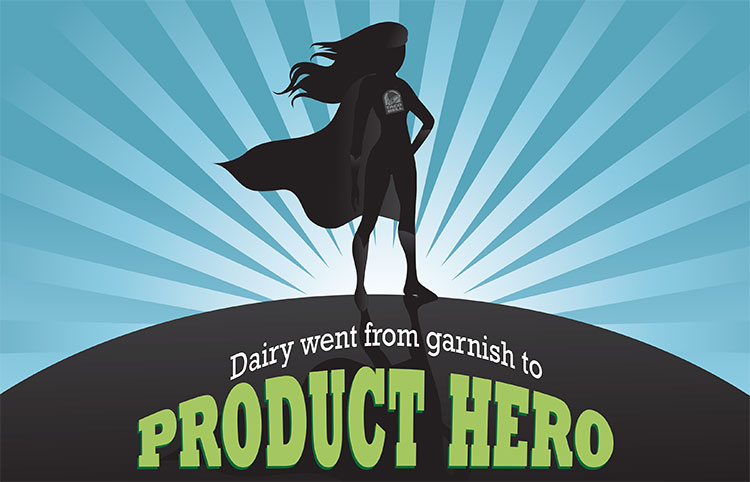 DMI opened our eyes to dairy,” stated Taco Bell’s Heather Mottershaw. “DMI just brought such a different level of knowledge to us. Our focus is now cheese.”

Mottershaw should know as a product specialist who has been with the Taco Bell brand, which is part of the larger YUM! Brands Inc. restaurants, for 13 years. In her current role, Mottershaw serves as Taco Bell’s senior director of innovation and quality assurance on its Food and Beverage Innovation Team.

The YUM! Brands Inc. family includes Taco Bell, KFC, and Pizza Hut. The latter, Pizza Hut, was highlighted on page 608 of the October 10, 2016, issue in, “It’s Super Cheese for the Super Bowl.” Like its sister brand Pizza Hut, Taco Bell has developed a partnership with Dairy Management Inc. (DMI) and the national dairy checkoff. The only difference is that Taco Bell’s relationship is a bit older with the good partnership interactions later sprouting the seeds of interaction at Pizza Hut.

“When we traditionally looked at the supply base for dairy, we had really seen it as a commodity,” reflected Mottershaw. “We looked at cheese in the food as a garnish and viewed cheese as a commodity ingredient coming into our facilities.

“We had a complete 180-degree turn on the situation,” Mottershaw went on to say.

“What do Taco Bell customers crave?” she asked rhetorically about the 50 million people who frequent its stores each week.

“It’s about fast, affordable, tasty, and creative. When you look at the role of cheese and what cheese can bring to the menu, cheese can brilliantly deliver on taste and the eating experience as well,” said Mottershaw. “DMI really helped us open our minds to that and in the process opened a whole new platform to us.”

“We frequently use focus groups to evaluate new products,” noted Steven Gomez, manager of Taco Bell’s Food and Beverage Innovation Team. “When we started to move cheese from garnish to center stage, consumer panels would totally get passionate about cheese,” stated the 10-year Taco Bell veteran. “Words like ‘ooey gooey,’ ‘cheese pull,’ and ‘melted cheese’ routinely were being used by consumers to describe our potential new product offerings. Quite frankly, these words were new to us and did not even appear on the initial product descriptions. That’s what really began to shift our focus to cheese. We found consumers really loved cheese,” said Gomez of the restaurant chain with nearly 7,000 U.S. restaurants and 300 additional international locations. 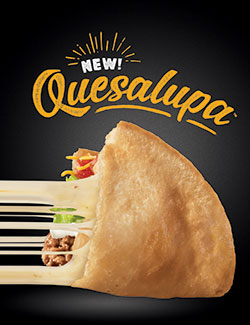 “When I started at Taco Bell 10 years ago, there was this idea of the cheese-stuffed taco,” stated Gomez. “It always caught my attention. However, nearly everyone we talked to thought it was too challenging to commercialize. That repeatedly put the idea on the back burner. Yet, the concept kept staring at me. ‘I hope we can crack the code on this idea one day,’ I kept saying to myself because it could be the next big item,” said the product specialist whose chain boasts $8.7 billion in annual food sales.

“We finally got to the place were we had a few prototypes,” said Gomez. “That begged the question, ‘Can we commercialize it through supplier partnerships and DMI?’

“The DMI partnership allowed us to place a dedicated resource on the Quesalupa project,” said Gomez, noting the trade name of what became the cheese-fused taco. To bring the product to life, Taco Bell had to make a machine to take tortilla taco shells and fuse them together with a dash of cheese placed between the two shells.

“The Quesalupa shell is really two tortillas fused together with the cheese placed in the middle in what we call a ‘secret pocket,’” said Mottershaw. “What we had to figure out was how to fuse the tortilla shells together and ensure those shells would stay together. That is where the expertise of DMI dairy scientist Lisa McClintock came into play, along with expertise from a supply partner,” said Mottershaw, who works for the nation’s sixth-largest Quick Service Restaurant (QSR) chain. “In fact, Lisa spent four months on the road to bring this product to the marketplace.”

“Lisa would continually visit our suppliers to ensure the Quesalupa’s tortilla shell made it to the marketplace,” added Gomez. “By having that dedicated person, we were able to develop this product on a much faster pace.”

“Now that we created the Quesalupa, the ideas are limitless because you can stuff all kinds of different cheeses in that pocket,” said Mottershaw. “It’s just limitless. We are super excited about this as a platform moving forward.”

While the journey to develop the Quesalupa may seem straightforward for the product launched during the 2016 Super Bowl, recall Gomez’s earlier statement: “Nearly everyone we talked to thought it was too challenging to commercialize.” That was the situation because the equipment needed to make the product didn’t exist and making the cheese-stuffed tortilla shell was still mainly a manual process.

“To meet demand, we have multiple plants across the country to make this product,” said Lisa McClintock, a full-time dairy scientist consultant to Taco Bell. “As the Quesalupa continued through the development process, I was going into these plants to make sure everything was working properly, including the tortilla shells fusing together with cheese,” said McClintock, noting the team had to create an 11-week inventory prior to the launch for Taco Bell’s nearly 7,000 U.S. restaurants.

“There are a lot of nuances. That includes getting the cheese centered so that it distributes properly between the tortilla shells. Remember, this product is all about the cheese pull,” said the four-year DMI-Taco Bell staffer. “If you don’t have the right amount of cheese or the cheese placed properly, you don’t get that cheese pull.”

How does the Quesalupa compare to Taco Bell’s original Crunchy Taco?

“The Quesalupa has five times the amount of cheese as the Crunchy Taco,” explained Mike Ciresi, a three-year on-site dairy scientist with Taco Bell. “The Quesalupa is dairy friendly, full of cheese and reduced fat sour cream.”

As for the product’s reception in the marketplace? It’s a hit. The Quesalupa has been well received by customers, and it just won top honors at the Prepared Foods 13th annual “Spirit of Innovation Awards.” Taco Bell and its vendor-partner Tyson Foods won the category, “Most Disruptive/Interesting New Product.” 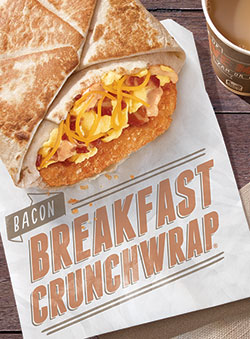 “We tried to launch breakfast about four or five times before we got it right,” recalled Mottershaw. “What we realized, people want American breakfast flavors in the morning. We now deliver those flavors with our unique Taco Bell twist.

“We have an ounce of Cheddar cheese on the Crunchwrap. However, we didn’t melt it at first. We simply grilled it,” said Mottershaw.

“Eventually from consumer focus groups, we learned that melted cheese is really important in the morning,” said Mottershaw of the restaurant chain dating back to 1962. “That caused us to go back and redevelop the Crunchwrap, and we now melt our cheese in the morning. Customers preferred the melted cheese much better than the initial version launched. By melting the cheese, we can deliver a yummy experience.

“Overall, breakfast has gone really well for us,” said Mottershaw. “It’s opened a completely new part of the day,” she said, reconfirming Taco Bell restaurants now open earlier each day. “The Bacon Breakfast Crunchwrap is the cornerstone of the breakfast menu. That being the case, cheese plays a huge role in breakfast.”

Cheese as the core

“The Cheesy Core Burrito is Mike’s baby,” explained Gomez when talking about a product introduction predating the Quesalupa. “Mike really expanded on this idea. We have this DMI dairy scientist here and he really exploded on ideas on how to bring this product to life,” added Mottershaw. “Mike built this product around cheese and dairy. The combination takes the product to a whole new level.”

Cheese wasn’t always the focus, however.

“We really knew we had an idea when we went to focus groups,” added Ciresi. “We tested five or six versions and overwhelmingly it had to be cheese. ‘Cheese. Cheese. Cheese,’ responded the focus groups.”

“That’s a good point,” added Gomez. “We had put other items in the core, but test panels always valued cheese.”

Part of the family

As for their collective seven-year tenure as dairy scientists at the Southern California-based company, “Taco Bell treats us just like employees,” said Ciresi. “We have face time with Taco Bell leadership.”

“Because we are part of the Taco Bell team, it’s not awkward that we are talking about dairy or milk. Our ideas are just as valid as everyone else’s ideas,” added McClintock.

“We are constantly referencing our ideas back to dairy farmers,” said McClintock.