Cows are incredible recyclers because of a unique digestive tract that allows them to utilize feed humans can’t or won’t eat. 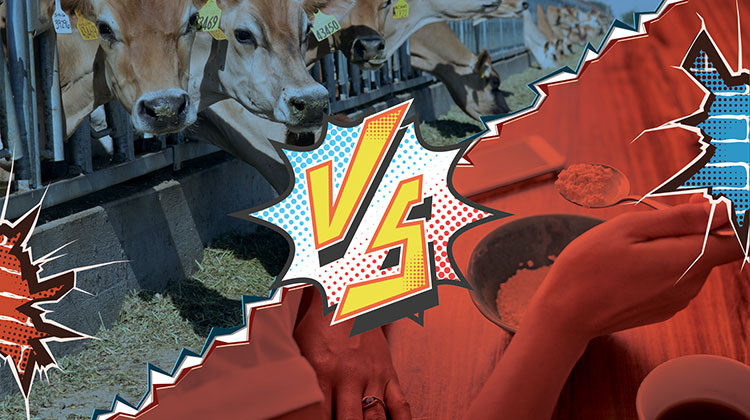 Only 2.2 percent of a cow’s diet is digestible and desirable to the U.S. human food market. Cows consume and utilize foods humans can’t and won’t, turning them into a healthy and delicious food for people.
As the dairy industry works to satisfy consumer concerns, the “Feed versus Food Debate” often continues to come up in conversations. That argument claims that production animals consume food that could be used for human consumption.

Without understanding all of the implications of a grazing-only business model, many consumers think cows ought to just eat grass, preferably in the form of pasture. They are concerned that much of the feed given to cows could otherwise be eaten by people. Some think there is no difference between sweet corn and field corn. And there is a perception that animals do not efficiently convert this valuable “human food” into milk and meat.

Most consumers have no idea that there are tons of inedible by-products produced by the human food industry every day that are fed to animals. If we didn’t feed these by-products to animals, especially ruminants, they would be composted, burned, fermented, spread on fields, or go into landfills.

It has been estimated that about 50 percent of corn that is processed for human food (for corn syrup, sweeteners, starch, beverage alcohol, and cereals) or used for ethanol, ends up as by-product feeds such as distillers grains, corn gluten feed, and corn gluten meal.

After processing wheat, about 25 percent is used as animal feed. Wheat middlings and red dog flour are commonly used by feed mills as part of dairy feeds.

Soybean oil is valuable for humans, but the remaining soybean meal (80 percent of the soybean) typically is used as animal feed. The vegetable oil in cottonseed is consumed by people, but the remainder of the cottonseed contains gossypol, which is toxic for humans.

Most dairy producers recognize that their cows eat a lot of by-product feeds that are either purchased individually from suppliers or are contained in a concentrate feed put together by a feed company.

But can you confidently tell a consumer exactly how much human edible feed your own cows eat? How would you figure this out?

First, you obviously need to know your cow’s ration, including the feed ingredient profile of any purchased mixed concentrates. Then, you need to assign each ingredient with the percentage of it that could be digested by humans. But you also need to recognize that even if humans can digest certain feeds that we give to cows, they still may not want to eat them!

The Innovation Center for U.S. Dairy calculated the human-edible portion of the average U.S. dairy cow’s diet. First, they surveyed 350 farms from around the U.S. and came up with the national average dairy diet. By-product feeds made up about 19 percent of the diet dry matter (DM).

Third, the demand for the human-edible portion in the human diet was estimated. In other words, if that feed was not fed to cows, would humans actually put it on their plates to eat? For corn grain, about 12 percent of the 91 percent that was considered to be human-edible was thought to be in demand for human consumption (0.91 x 0.12 = 0.109).

As you can see in the table, the average U.S. dairy cow diet contained 9.7 percent corn grain. The portion of that corn considered to be edible by humans was 8.8 percent (9.7 x 0.91). But the amount of the cows’ corn that might otherwise actually be put on someone’s dinner plate or in a cereal bowl was only 1.05 percent (9.7 x 0.109). The table shows the human-edible estimates for other feeds in the common U.S. dairy cow diet.

It was concluded that about 20 percent of the average U.S. dairy cow diet could be eaten and digested by a human. However, only about 2.2 percent of its ration would actually be desired by the U.S. food industry.

This study does a great job of showing that the competition between cows and humans for food is minimal. Rather, cows are great recyclers and make highly nutritious food out of feed ingredients that would otherwise be wasted.

As you talk to or blog with nonfarmers, they may ask you about how much “human food” your cows eat. Depending on the region of the country where you live and current grain prices, you might find that your numbers are different from those reported here.

If you really want to promote your farm’s sustainability, remember that researchers have shown that it is possible for cows to milk well on lower starch diets that have high fiber digestibility. In an experiment conducted at the Miner Institute in Chazy, N.Y., when nonforage fiber from beet pulp, wheat middlings, and distillers grains replaced some of the corn in the diet (11 percent DM), milk production remained the same at 115 pounds per day of 3.5 percent fat-corrected milk (FCM).

This article appears on page 43 of the January 25, 2017 issue of Hoard's Dairyman.
Related

Decisions to make in an inflationary environment
Features
Related to:
features, consumers, nutrition
In Features