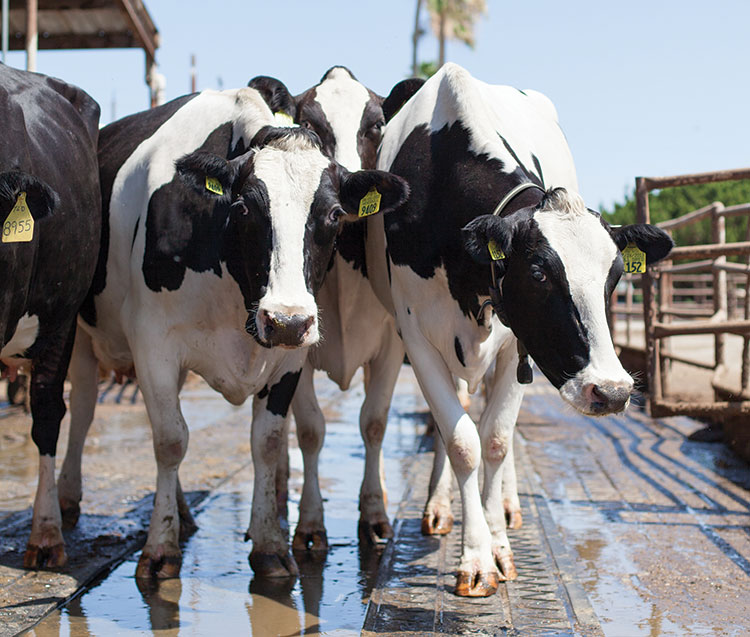 In today’s world, milk production efficiency is the name of the game. Feed efficiency is often calculated as the pounds of 3.5 percent fat-corrected milk (FCM) produced per pound of dry matter consumed. Many people are familiar with using this simple calculation for pens of cows where early-lactation cows should have a calculated feed efficiency of at least 1.7, while an entire herd should strive to have a feed efficiency greater than 1.5.

For long-term farm profitability, experts have focused on lifetime feed efficiency. This is the percentage of lifetime feed energy intake that is converted to milk, a calf, or body tissues. It takes into account such factors as heifer growth rate, reproductive efficiency, and dry period length.

Over the last century, lifetime feed efficiency has doubled on U.S. dairies primarily because of improvements in milk production per cow. As production rises, a smaller proportion of the nutrients consumed by the cow need to be used for growth and for maintenance functions such as walking, breathing, and metabolism. Unfortunately, the marginal positive effect of this dilution of maintenance drops as production climbs. So, with today’s very high-producing cows (greater than 33,000 pounds per year), we now need to look for other methods of improving efficiency further. 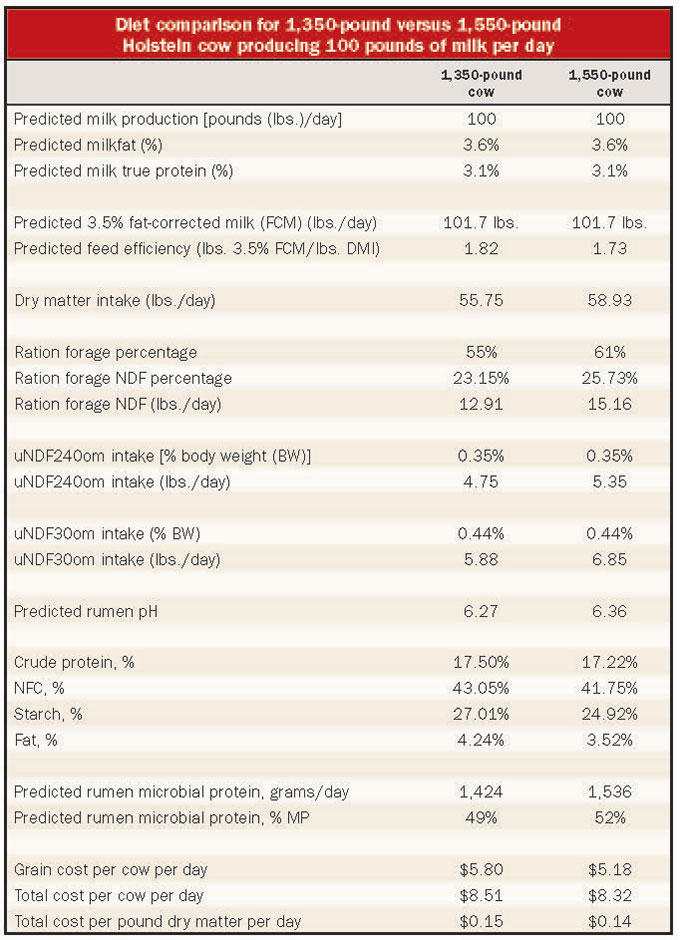 Unfortunately, simple feed efficiency calculations do not tell us the whole story. Many discussions on feed efficiency begin with the assumption that all rations cost the same per pound. In reality, this rarely is the case. Both feed efficiency and lifetime feed efficiency do not consider the cost of each pound of dry matter eaten by the cow. These metrics also disregard if feed energy was produced by the farm or had to be purchased. Calculated feed efficiencies will be lower if cows are eating a large amount of a less nutrient-dense ration made up of highly digestible forages. But this could be a highly efficient and desirable situation.

I know many top-notch dairies that have big Holstein cows with an average mature weight greater than 1,600 pounds. As a nutritionist working in an area of the country where highly digestible forages can be grown, I see an advantage to big cows that can eat and digest a lot of forage fiber. When rations are balanced with a higher percentage of forage fiber and less grain, rumen health often improves and the cost of each pound of dry matter consumed is less. If more physically effective fiber can be incorporated into a less nutrient dense diet, rate of passage of small grain particles can diminish, improving diet digestibility.

Using current feed and forage prices, I developed typical Northeast U.S. rations for a 1,350-pound cow and a 1,550-pound cow. Both were producing 100 pounds of milk per day. The table shows the predicted dry matter intake, nutrient parameters, and costs of these two example diets. The bigger cow was predicted to consume more dry matter and more fiber from forage, resulting in lower feed costs.

We need to recognize that no one measure can fully express your dairy’s true efficiency. So, measure dry matter intake and calculate feed efficiency on your dairy. Consider improving lifetime feed efficiency in your herd via genetic selection. But don’t forget to also calculate economic efficiencies.

Should you have bigger or smaller cows? I think the answer to that question is farm specific.

What is your current level of production and your strategy for making money in the future? Consider your management and facilities, both current and future.

Will bigger cows get more beat up in your barn? Do you have the ability to economically grow digestible forages? Or, is it better to take advantage of local commodities and inexpensive grains and not push for high forage fiber intake?

These are just a few of the questions that need to be asked by individual dairy producers and their advisers.

We can feed for fertility
By Mary Beth De Ondarza