MANURE-RELATED AIR EMISSIONS do not have to be reported under CERCLA or the Comprehensive Environmental Response, Compensation, and Liability Act. That clarification took place when Congress included language in an omnibus bill signed into law by President Trump.

TO PRESERVE CO-OP’S COMPETITIVE POSITION in the marketplace, Congress recreated the Section 199 provision previously amended in the Tax Cuts and Jobs Act of 2017. The change also was included in the mid-March omnibus bill, and it is retroactive to January 1, 2018.

KEY COMPONENTS OF THE DAIRY PRIDE ACT were added to the same bill. It instructs FDA to restrict the ability of those producing products from plant foods to use the term “milk.” This also extends to misusing other dairy food names such as “cheese” and “yogurt.”

CLASS III FUTURES HELD STEADY from early- to late-March trading on the CME. April to December contracts averaged near $15.30, with May being the low at $14.40 and October the high at $15.95.

NEW MEXICO AND MICHIGAN had the lowest Mailbox Milk Prices among all regions at $15.24 and $15.59 per hundredweight, respectively. California came next at $16.19. On the high end, Florida netted $19.02.

CLASS I MARKET SHARE DROPPED to a modern-day low of 30 percent when reviewing the 2017 Federal Milk Marketing Order data. Just five years earlier, Class I beverage sales had been 35.5 percent of all milk sales.

CALIFORNIA ACCOUNTED FOR 32 PERCENT of U.S. dairy exports. Meanwhile, the Golden State exported 100 percent of almonds, walnuts, and pistachios. It also exports 91-plus percent of all U.S. wine.

QUALITY ONLY COUNTS WHEN IT REACHES THE COW.
Harvest technique is key to making winter forage a high-quality feed. 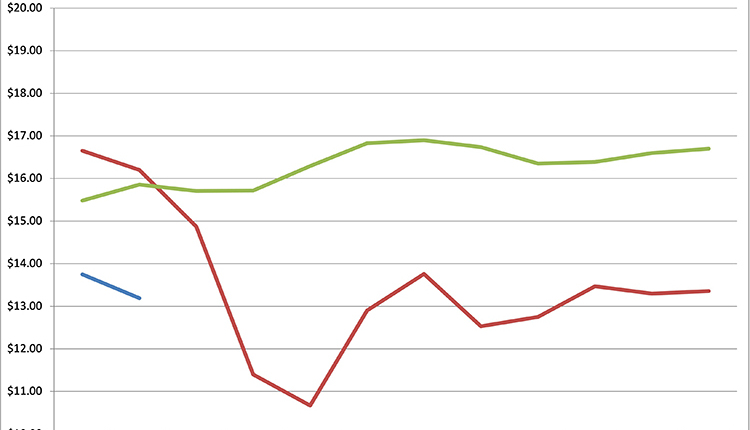