It disheartens us to come to grips with this notion . . . dairy’s trendline looks far closer to hogs than it does to beef. That’s because no other sector outside of swine has consolidated at a faster rate than dairy from 1987 to 2012.

At the close of the Reagan administration, cow-calf operations and dairy were on the same business plane. Beef’s midpoint was 89 cows per herd, while dairy had 80. In stark contrast, there were 1,200 pigs on the average hog facility in that era. Meanwhile, broilers (300,000), laying hens (117,839), and turkeys (120,000) had already experienced significant growth in flock size, an indication of consolidation.

Fast forward 25 years, and those midpoints — when half of the animals housed on farms are on each side of the count — changed dramatically in several categories. But none . . . except for swine . . . were faster than dairy’s 1,025 percent, reported USDA’s Economic Research Service. 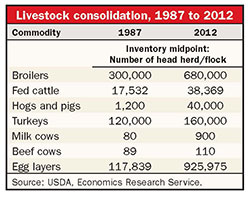 In stark contrast, beef held relatively steady, shifting 24 percent from 89 to 110 cows as shown in the table. Researchers surmised that because cow-calf operations mostly graze their animals, beef sector consolidation occurred at a much slower pace.

It stands to reason that larger dairy farms now account for more milk sales. In fact, only the highly intensive, specialty crop category had a higher sales concentration. To that end, specialty crop farms with $5 million or more in sales accounted for 58.7 percent of “gross cash farm income.” For dairy, that number stood at 44.6 percent. On the flip side, small farms with under $350,000 in annual sales captured 11 percent of sales in both the specialty crop and dairy categories.

Finances and economies of scale favor larger operations because these businesses can achieve higher rates of returns on assets. That’s the principle reason dairy farm numbers have shrunk from 131,500 to 40,000, yet the number of dairy cows in the national dairy herd essentially held steady since 1992.

Interest rates and inflation deserve your attention
Features
Related to:
features
In Features