Time-lapse video is a great way to see what cows are doing all day long. 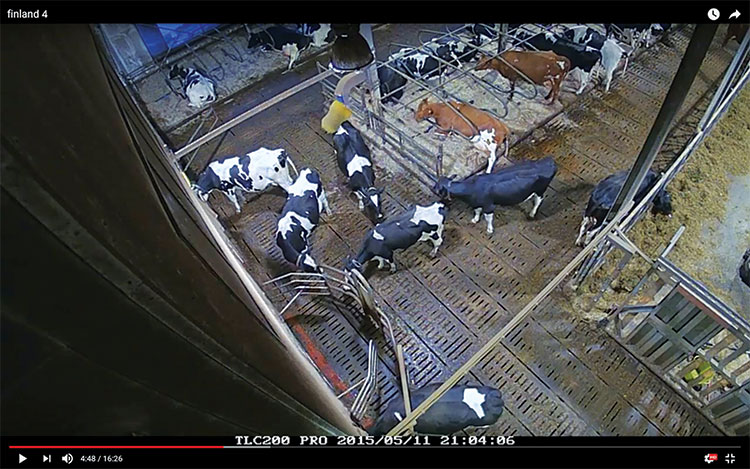 Time-lapse photography shows us what cows are doing when humans are away and can reveal bottlenecks in the barn.

Time-lapse photography is defined by Wikipedia as “a technique whereby the frequency at which film frames are captured is much lower than that used to view the sequence. When played at normal speed, time appears to be moving faster.”

This technique has been used by researchers to investigate cow behavior, stall usage, and at the feedbunk. The advantage of the time-lapse videos is that you are able to condense a long period of time into just a few minutes of video. Twelve hours can be seen in 15 minutes when used at 50 times the speed.

On the farms we have investigated and used time-lapse video, the average productive time has been 83 percent (from 71 to 89 percent). Mostly cows were found at the feedbunk or lying in the stalls. Two examples are shown in the figure. 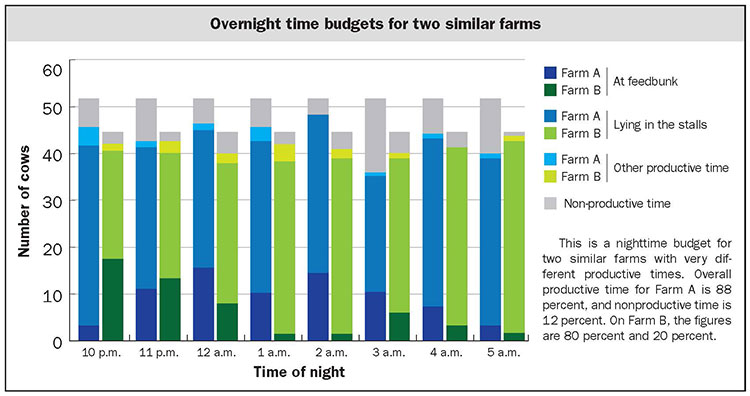 When using time-lapse photography, the cameras are taken into the barn late in the evening. The location of the cameras is very important. The angle of view must capture cows at the feedbunk, in the stalls, and also at the robot entrance. The cameras stay on until the next morning, and that allows us to see what is happening in a barn during those 12 hours.

Nighttime is an ideal time for time-lapse recording in a robot barn because that’s when the cows’ behavior is independent of human interaction. It is also a very good opportunity to see what is happening with the cows those six to eight hours when people are not there.

The measured productive time varies a lot from farm to farm. What is the reason for that? Cows are the same everywhere, so it must have something to do with the environment, housing, or management of the cows.

Quite often we have been able to pinpoint the problem area as the stalls. Studies have shown that aggressive neck rail positioning or uncomfortable, short stalls predispose cows to perch or stand for extended periods in the stalls.

Many farms we have investigated also have had problems with nighttime lighting. Lights that are too dim and total darkness can be the reason for too few visits to the robot. On one farm, for example, lights went out for over an hour around 2 a.m. due to a mistake with the programmed timer. There were almost no visits to the robot at that time. The managers of that farm were not aware of that “dark hour” since nobody was working in the barn at that time.

Feeding and the timing of feeding has a great impact on cow traffic in a barn with robotic milking. Cows are very active with eating early in the morning, and that’s why many farms deliver fresh feed somewhere between 5 and 6 a.m.

Our time-lapse recordings have shown, though, that this is not always the optimum time. In many cases, the feedbunk is empty for a long time before that, sometimes as early as 2 a.m. On the time-lapse video, you can see that an empty feedbunk is a total stop sign for cow traffic. Cows stay lying in the stalls because there is no feed, and that also means many fewer visits to the robot.

On some farms, feeding is done after the main work has been done, somewhere between 8 to 9 a.m. Cows have been activated earlier when fetched for milking or when cleaning stalls, so they start to seek feed. Without anything to eat, they go back to the stalls. A lot of milk doesn’t get harvested in this situation.

One interesting thing that is easily seen in time-lapse videos are the “roadblocks” in the barn. Wrong positioning of a cow brush or waterer combined with the presence of a boss cow can block the timid cow’s way to the milking robot. It is very important that there is enough room in the waiting area in front of the robot. A cow must be able to comfortably enter the robot from all directions.

A cow in heat can also be a “roadblock” in a robot barn when it’s not grouped properly. One rambunctious cow can empty the entire feedbunk by chasing other cows away several times a day. From what we have seen on time-lapse videos, we think it’s very important to group cows in heat in a separate pen or area.

Free cow traffic is most common on the robot farms where we have used time-lapse photography. Only a few farms have had forced or guided cow traffic. In those barns, the main thing we noticed is the long waiting periods of socially low-ranking cows in the robot commitment pen. The only way out is through a robot.

A fresh heifer can stay in a robot commitment area a very long time before having the courage to step into the robot box. In our recordings, the longest time a cow waited has been over nine hours without water, feed, and a place to rest.

In this kind of system, there are reports from robots telling us how long an individual cow has spent in the commitment pen. Yet, many farms haven’t really analyzed this information and changed the gate settings accordingly.

Time-lapse photography and analysis is an effective tool to improve the efficiency of existing robotic barns. These videos help us design even better facilities for cows and humans.

Key elements in facilitating fluent cow traffic are the right grouping of animals; stall dimensions; overall comfort; stocking density; the timing of feed delivery and feedbunk management; a spacious waiting area in front of the robot; and the right kind of gating.

It is important to take a bird’s-eye view of the robotic barn every now and then. Make sure that all the pieces of the big picture, from the people to the cows to the barn environment, are working well together.

The randomness of reproduction
Reproduction E-Source
Related to:
features, technology
In Features