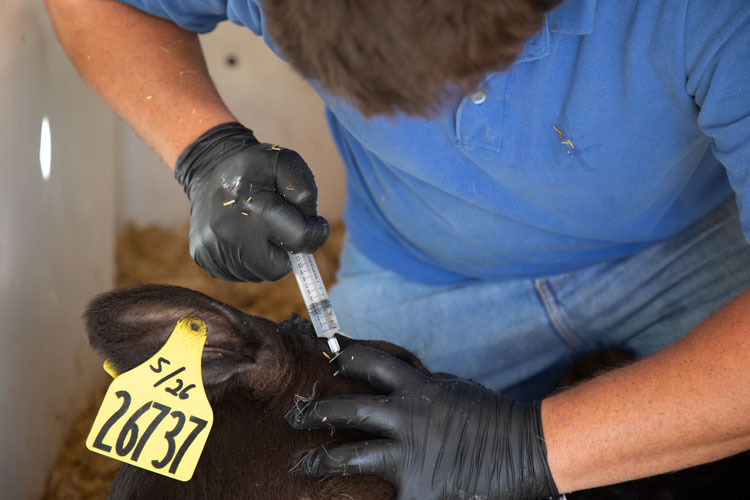 Horns on cattle were a natural part of farm life for most operations, but around the 1960s, producers realized that removing these horns makes for a much safer and easier working environment. A few methods of disbudding, defined as destroying the undeveloped horn bud, have risen to the top in the past decades. However, this doesn’t mean horn removal is an easy process for farmers or animals.

Farms have increasingly adopted medications to control the pain animals experience during cautery (physically burning the horn bud, such as with an iron) or the use of caustic paste (chemically burning the bud), but different protocols exist on various farms. If you’re looking to start or improve a pain mitigation program for these two most common disbudding methods, consider this two-step program: administering a local anesthetic and then a nonsteroidal anti-inflammatory drug (NSAID). This is the most effective option, according to Charlotte Dwinder, D.V.M., D.V.Sc., of the University of Guelph as presented in a recent Dairy Cattle Welfare Council webinar.

Why we should use pain control
It’s important to understand why pain control is recommended in the first place. Disbudding is obviously an uncomfortable procedure for the calf, and Dwinder referenced a survey of Ontario dairy producers from 2014 that showed their top reason for using medications during disbudding was to limit that pain. Other top reasons were for the safety of the calf and the person doing the disbudding, and for easier handling of the calf during the procedure.

A few Canadian farmers said they used pain control because of consumer perceptions of the industry. Even a higher proportion of Americans selected this reason when asked why they used pain medications.

Dwinder also noted that both the U.S.’s FARM 4.0 and Canada’s ProAction programs mention pain control. In the FARM manual, pain mitigation is “expected” for disbudding procedures that must occur before eight weeks of age. ProAction’s most recent update requires that pain mitigation must include an anesthetic and an analgesic, such as an NSAID.

Do we need both?
When it comes to pain control, two is better than one. A local anesthetic blocks the immediate pain of a dehorning iron or caustic paste, but to make a difference on more lingering pain after the procedure, an NSAID should be given to limit the inflammatory response.

Dwinder cited research showing that calves receiving both treatments during dehorning with an iron had lower total cortisol levels, a measure of stress, than calves receiving only a nerve block. Caustic paste is perceived to be less painful than an iron, but calves still benefitted from an anesthetic and NSAID after paste application — they displayed fewer pain movements such as head shaking, scratching, and restlessness. Of course, there’s a wide variation in pain responses, depending on coordination of the calf (particularly with paste when the treatment is applied soon after birth) and even age. Especially in the case of young calves, it’s important to remember that just because a calf may not be expressing pain doesn’t mean it’s not uncomfortable, said Dwinder.

When both treatments are used, proper technique is vital. Administering a local anesthetic requires some skill and training to be accurate, but NSAIDs can be added to a program more easily since they are delivered orally or subcutaneously. Dwinder emphasized that employee confidence in their techniques will make for more effective pain mitigation.

Practices are changing
We continue to see more recognition of the need for pain control. That same 2014 study of Ontario dairy farms asked what kinds of medications they used, and 62% of producers reported using a local anesthetic. That’s especially impressive when considering that a similar survey 10 years prior found only 21% of farmers using anesthetics. NSAID use was even more improved — no use at all reported in 2004 rose to a quarter of farmers using them by 2014. The vast majority of producers said that talking with their veterinarian was the main reason they changed or adopted pain control methods.

The economic argument
It’s easy to look at these recommendations and see another expense added to the herd health budget. So how do we justify the cost? There’s not much evidence yet relating pain mitigation directly to milk production, reproductive performance, or an easily identifiable quantitative benchmark. Dwinder makes the point, however, that while the economic argument for pain mitigation may not be made on an individual calf basis, it can be made on the herd level and the industry level, as improving welfare in this regard will influence our ability to sell milk.