Returning to their grass roots

Grazing and regenerative agriculture were a perfect fit for this fourth-generation dairy farm family.

By Dianna Malcom
The author is a former co-owner of Bluechip Genetics at Shepparton in northern Victoria, located inland on Australia’s eastern seaboard. 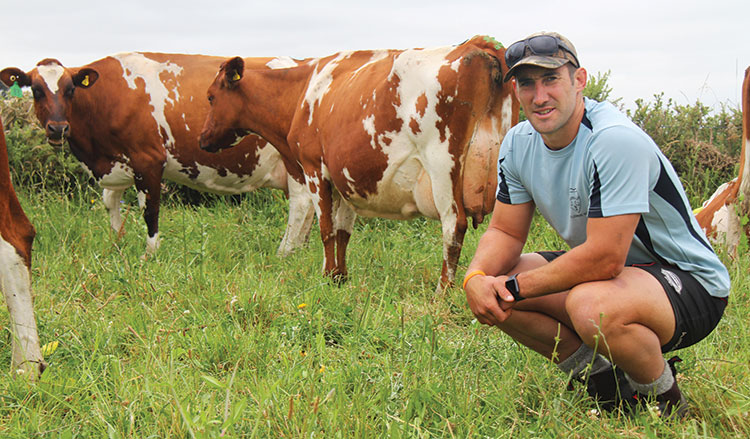 “In the past, this pasture was irrigated every week under a center pivot. However, under a regenerative-agriculture regime, that has been reduced to just one watering this summer,” said dairyman John Legg
The value of hindsight has been proven for a New Zealand dairying operation as it focuses on sustainability for the future. Owned by the Legg family, Lakeside Ayrshires is a 180-hectare (445 acres) operation located on the South Island. It’s some of the world’s most natural dairying country and just 30 minutes from the catastrophic 2011 earthquake in Christchurch.

The family has resisted the global charge toward Holsteins and is knocking on the door of achieving 100 years of owning a fully registered Ayrshire herd. This is in addition to contract cropping, sheep, and crossbred beef, which has allowed the property to support four generations.

The 200-cow milking herd, now A.I.-bred using North American bloodlines, includes descendants from live animals imported from Scotland between the late 1950s through the 1970s. They have bred for capacity, temperament, and, lately, with some focus on the A2:A2 milk protein.

The herd averages 75,000 kilograms (165,400 pounds) of milk solids a year, produced from the heavy, fertile soil that receives 750 millimeters (46 inches) of annual rainfall. This year, the family’s milk company, Fonterra, paid $7 per kilogram of milk solids.

The cows live outside all year round and are fed a predominately grass diet with 2.2 pounds of grain through the parlor. They are supplemented with silage and hay. They have a solely spring calving pattern, which means the 16 per side swingover herringbone parlor is shut down between late May and the middle of July, when the cows are dry during the Southern Hemisphere’s winter.

In the past three years, their property has become a hub of significant interest after the youngest member on the farm, John, 32, began pursuing a policy of regenerative agriculture. With another generation hopefully coming behind him one day, John said they were mindful of their future.

Regenerative agriculture is a conservation and rehabilitation approach to food and farming systems. It focuses on topsoil regeneration, increasing biodiversity, improving the water cycle, enhancing ecosystem services, supporting biosequestration, and strengthening the health and vitality of farm soil.

At the time, it was considered a bold move. Now, their peers are visiting for more information and to track the family’s progress as they consider their own options.

John reports that the herd’s production has improved by 8%, they haven’t had to invest in center pivot irrigators, and their waterways are as healthy as any in the district.

“Everyone thinks it’s a bit of a radical idea, but I wouldn’t describe myself as a radical guy,” John said.

He said he was inspired after listening to New Zealand-born Nicole Masters (of Integrity Soils), who lives in the U.S. for much of the year.

“A lot of what she was saying resonated with me. And we were already starting to think a bit like that because of the pressure we’d been under with New Zealand’s environmental legislation,” he explained.

No “one road to Rome”

“There are no silver bullets here or one road to Rome,” she said. “It covers a wide range of approaches, tools, and the thinking required to build soil and ecosystem health, food quality, and profitability. You can call it what you want. We call it common sense.”

John said before going down that path, they already had a solid foundation for regenerative agriculture. They never had a high use of chemical or synthetic fertilizers and were already dabbling in direct seeding. They had a lower stocking rate of two cows per hectare (2.5 acres) and had also resisted the Canterbury region’s love of center-pivot irrigators, which dominate the landscape.

“When we first started, I wanted to farm with limited irrigation, and that was why we never put in the center pivots like everyone else,” John said, as he looked down at the pasture his cows were grazing that day. Despite being halfway through summer, it had been watered just once.

If the same pasture was under a center pivot, he observed that they would have been dropping 2 to 3 milliliters (0.2 inches) on that pasture at least once a week to encourage growth.

“I think when you start to understand the network underground, it changes your perspective,” John said. “In this pasture, we have red clover (drought-tolerant with a big tap root), chicory (good for compaction, which gets moisture down into the soil), plantain (soaks up nitrogen), ryegrass (prolific in the spring), and clover.

The Legg family rests pastures for 30-plus days between grazing.

“When a plant gets to a certain maturity, it’s photosynthesizing, so less is going into its growth and more is going into pumping liquid carbon into your soil, which is fed on by soil organisms,” John said. “So, if you’re grazing it at a low residual, it’s not getting the chance to do that.

“This is the way nature designed it to work. Our landscape is made for diverse species, which includes birds, bees, and insects. The pasture smells nice now, and I like walking through it and hearing all the bees,” he elaborated.

“I think the cows are grazing the pasture a lot more evenly. And I’m really noticing improved herd health. We’ve had fewer cases of mastitis, less lameness, fewer downer cows, and our in-calf rate has definitely improved,” he observed.

New Zealand’s industry has historically relied heavily on nitrogen to push grass growth. Government regulations are strict about how that practice impacts the country’s water resources. It is capped and monitored.

“We have to have under 15 kilograms (33 pounds) of nitrogen loss per hectare per year. It’s harder on the guys with lighter soils than our heavier ones because there is naturally more leaching on those properties. Our nitrogen loss was measured at 4 kilograms per hectare (3.6 pounds per acres). The officials couldn’t believe how good that was,” he said.

There are 12,000 dairy farmers in New Zealand who enjoy its abundant rainfall; temperate climate; and a subsequently low cost of production. Dairy contributes 3.5% to New Zealand’s total gross domestic product, and it is the nation’s highest goods export sector. Globally, New Zealand is the world’s eighth-biggest dairy producer, a standout feat for a total population of just 4.7 million people.

John said the benefit of hindsight offers New Zealand a wonderful opportunity to take advantage of what it means to be one of the world’s youngest dairy nations in the soil-health space.

“The soils in the United States are reportedly depleted in organic matter. That’s because they’ve farmed them for so long in a certain way that they are talking about a soil organic matter of 1%, and they are only so many crops away from not being able to farm it again,” John said.

“Whereas in New Zealand, because we’re such a young nation with the benefit of hindsight, we have between 5% to 10% organic matter on our farms. “I’m sitting here thinking, ‘Let’s learn and implement stuff now so, in 40 to 50 years, we’re not starting from the base camp of organic matter,’” he concluded.

Class I pricing needs an overhaul
Features
Related to:
features, grazing
In Features