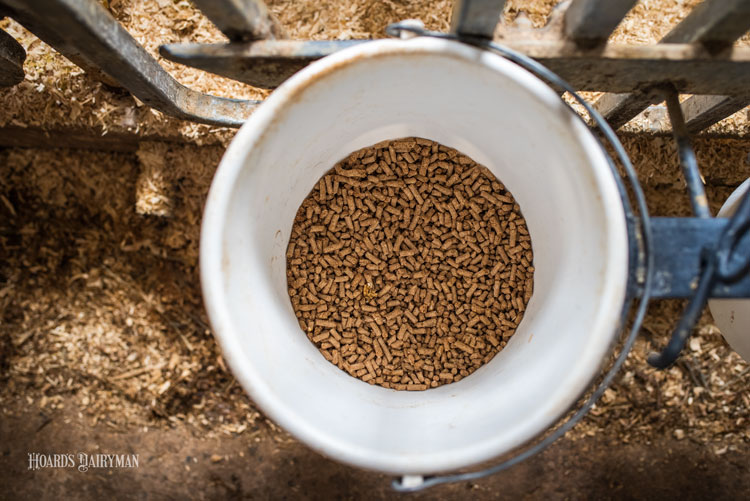 The correct nutrients, at the right time, creates the right recipe for optimal growth. That’s the winning strategy to develop the rumen in dairy calves.

“With starter grain, in particular, we want it to be palatable to encourage intake,” said Cassie Yost, education educator with Penn State. She suggested avoiding very fine-textured feeds, since they tend to clump together when they get wet, which lowers intake.

“A lot of research has pointed to the sweet spot at about 5% to 6% of molasses in those starter feeds,” Yost said during the webinar “Rumen Development in the Dairy Calf,” by Penn State Extension.

It’s a fine line
There is an inverse relationship between calf liquid intake and starter intake.

“Not all starters are created equal . . . one problem that we do run into with these starters are so fine, is that they tend to cake together,” she said. For water and feed, “It’s always a good option to figure out some way to separate those buckets. A little bit of bucket separation can help us keep our feed a little cleaner, a little drier, and kind of eliminate some of that cross contamination of the water and the feed.”

“The end result is a nice, fully developed rumen with lots of papillae growth . . . that grain is the catalyst that gets that rumen developed,” she said.

Grain and sugar digesting-bacteria require a low pH to get established and grow, and the fiber digesters require a more buffered pH to grow (pH more than 6).

Backed by research
Jud Heinrichs, a professor of dairy nutrition at Penn State, has done about 50 studies on rumen over the years. In one study, he gave calves grain and recorded the pH of their rumen over time.

“Those bacteria produce acid really fast. They’re very efficient. Within three to four hours, they produced a lot of acid — we’ve got a pH of 4.5 and some that have gone down even into 4,” Heinrichs said.

A lot of the old rules on weaning say that a calf has to eat 1.5 pounds of starter for three consecutive days, but Heinrichs warns that it really takes 21 to 28 days to develop the rumen.

“When we have poor rumen development, it often costs a month of growth after weaning,” he said.

Not only does poor rumen development cause loss in growth, but it also stresses calves.

“It stresses their immune system, and we often see respiratory issues in these newly weaned calves caused by stress,” he said. “A lot of that stress is because it isn’t physiologically developed to be weaned yet.” (See figure.) 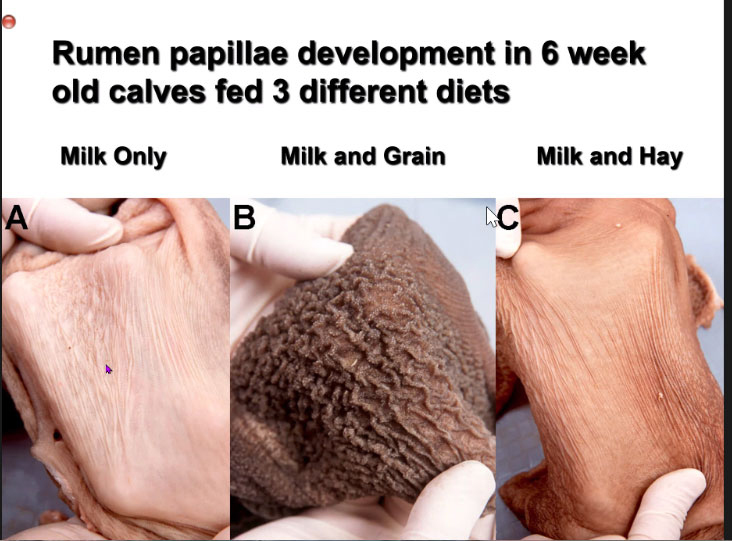