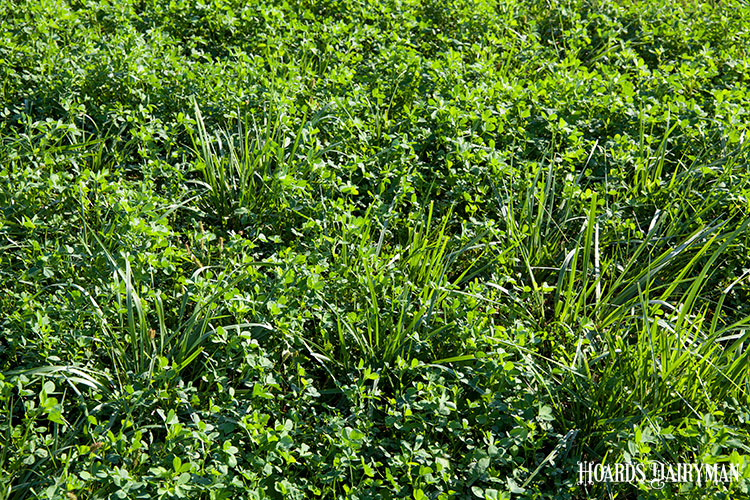 Planting and growing an alfalfa-grass mix is really a two-pronged question. Does it work from an agronomic aspect? How will the cows respond when putting milk into the bulk tank?

Researchers at Cornell University set out to answer those questions via an alfalfa-fescue research trial. In this particular trial, the team evaluated the feasibility of HarvXtra alfalfa in mixtures, as well as test meadow fescue varieties and seeding rates for achieving a 20% to 30% grass mixture with alfalfa.

They defined the target date for harvest based on neutral detergent fiber (NDF), which for lactating dairy cattle is typically 50% to 55% NDF for grass and 38% to 40% for alfalfa.

“You can easily balance rations for energy and protein, but it’s not so easy for fibers,” said Jerry Cherney, a Cornell University plant science professor. “It really boils down to, ‘What are the NDF values?’” he asked in a rhetorical fashion.

In 2018 to 2019, they tested throughout the state on one alfalfa variety, 19 meadow fescue varieties, and Bariane tall fescue. 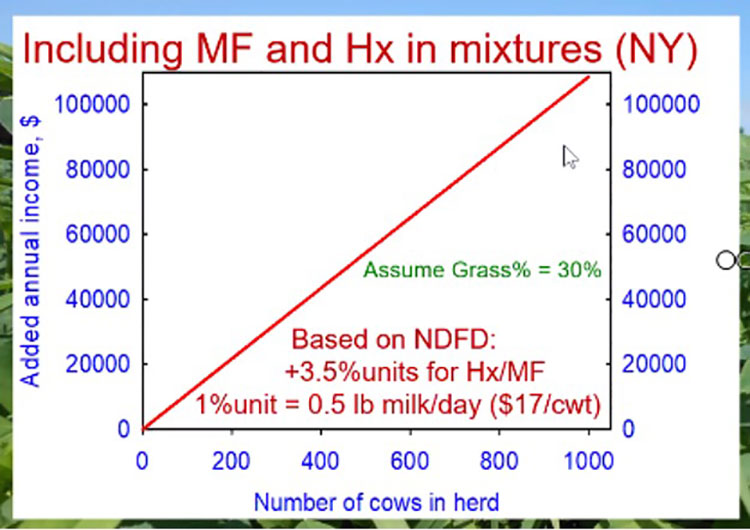 “There’s a little bit of consistency, but, in general, varieties tend to be different over different locations, and so that’s kind of a problem with grass. Alfalfa varieties perform the same across environments, but grass does not,” Cherney said during his presentation “Nutritive Value and Yield of Reduced-Lignin Alfalfa Cultivars in Monoculture and Binary Mixtures with Perennial Grass.”

In 2020, they seeded at eight farm sites in New York and Vermont with one alfalfa and 10 grass varieties. They picked a range of varieties to compare in terms of seeding rate and fiber digestibility.

In looking at the potential economic advantage of putting meadow fescue varieties and HarvXtra alfalfa in mixtures in New York, Cherney found more pros than cons.

“My assumption for added income is based on the results we’ve gotten, assuming it’s a 30% grass stand. With 1,000 cows, we’re getting over $100,000 a year,” he said. “That’s pretty big. These differences also are farm size neutral, in other words, whether you have 100 or 1,000 cows, you’re going to get the same benefit per cow. Clearly you can have a significant advantage by adding one or both of these to a mixture.”

Pick an effective inoculant for your silage
Crops and Forages
Related to:
Intel-R, crops
In Hoard's Dairyman Intel - Thursday