Using real-farm data, we can see the impacts of ketosis on today’s dairy herds. 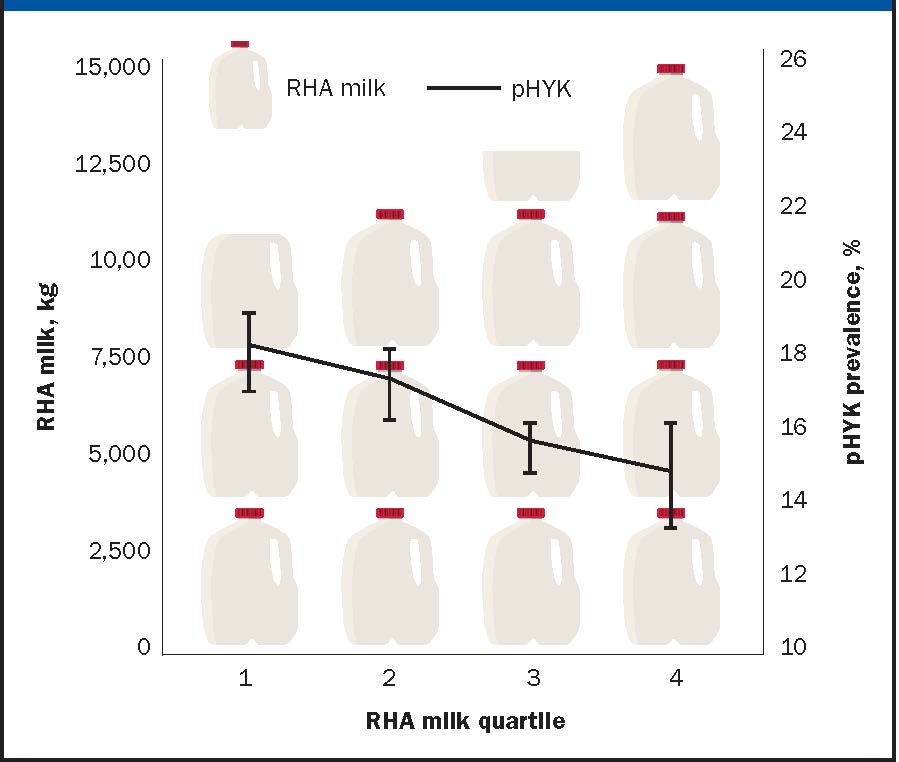 Figure 1. Predicted hyperketonemia (pHYK) prevalence decreased linearly across increasing rolling herd average (RHA) milk yield quartiles.
Detection of hyperketonemia, more commonly referred to as subclinical and clinical ketosis, has progressed greatly in the last decade. We have several options for cowside testing and now have ways to predict hyperketonemia (HYK) from a combination of milk variables and cow data that are routinely collected during Dairy Herd Improvement (DHI) milk testing.

Comprehensive prediction models were published and made available for implementation by DHI laboratories. AgSource Cooperative has been implementing these models as the KetoMonitor since 2014. Not only has this served as a tool on-farm, but we can analyze the data generated to do an epidemiological analysis of HYK and its impact.

Data from 240,714 lactations across 335 farms that granted permission were included in such an analysis that was recently published. This data has allowed us the opportunity to review the impacts of hyperketonemia on farms. Full analysis was recently published in the journal Animals, which can be found at on.hoards.com/HYKpredictions. Summarized here are some of the key findings from this study.

At the individual cow level

Understanding that hyperketonemia is often associated with mobilized body fat during negative energy balance, and that the mobilized fat provides preformed fatty acids for milk fat synthesis, an elevation in preformed and mixed fatty acids in milk of HYK cows is expected biologically. The shift in milk precursors may reflect some of the adaptations that allow cows to navigate the postpartum period. In fact, first test milk energy yield was greater in predicted HYK cows, despite lower milk yield.

There was also greater somatic cell count (SCC) at first milk test in cows with predicted HYK. Differential SCC, the proportion of polymorphonuclear leukocytes and lymphocytes, is of recent interest given the potential to provide insight into immune status and was greater in second and fourth-lactation cows with predicted HYK. This type of analysis cannot determine which came first (elevated SCC or HYK); however, presence of mastitis has been noted as a risk factor for HYK previously.

What are the risk factors?

Within this dataset, we were also able to look broadly at what happened prior to HYK onset, which provides insight into potential risk factors. The length of the preceding dry period and calving ease score were greater for predicted HYK cows. Of note, calf mortality was higher for calves born to first-lactation cows that were predicted to have HYK. Previous lactation somatic cell score and dry period length were also greater for predicted HYK cows.

Mastitis, dystocia, and stillbirths can indicate or contribute to immune challenges in the cow, which may raise HYK risk indirectly through reduced feed intake. Possible interactions of immune response and metabolic disorders are also of great interest and should be further researched.

In addition, longer dry periods are often culprits due to more body condition prepartum. For these reasons, monitor cows that have had long dry periods or complications during parturition to ensure that if HYK occurs, it can be detected and treated early.

In agreement with previous observations, cows predicted to have HYK had more farm-reported cases of displaced abomasum, milk fever, and retained placenta. Information on relative time of onset or treatment was not collected, but regardless of which comes first, there is no doubt that transition period health incidences are often related.

Onset of multiple health events, together with poor milk production, often leads to culling decisions. In this dataset, the reasons for culling within the first 60 days of lactation included injury and disease, sold as dairy, death, production, and mastitis. Among the culled cows, predicted HYK cows were more often culled for injury and disease and less often sold for dairy than their non-HYK culled herdmates.

Stratification of the data by cows kept in the herd versus those culled from the herd points out some interesting patterns. Of cows that were culled, peak milk yield of predicted HYK cows was less; however, there was no difference in peak milk yield between cows predicted to have HYK or not. This could mean that the combination of hyperketonemia and low milk production is a strong selector for culling, or it could indicate that when more severe HYK cases are culled, we are successfully culling cows that will have the biggest negative impact on milk yield.

Mature equivalent (M.E.) milk yield and protein yield is less for all HYK cows; however, the difference between HYK and non-HYK predicted cows is less for cows that are retained in the herd compared to those that were culled. Together, this data provides a unique perspective on the role of on-farm culling practices to curtail the negative impacts of HYK on herd-level production, and ultimately contributes to reducing the impact of HYK at the herd level.

Advancements in hyperketonemia detection tools available to farms provide options that range from individual cow blood testing to whole-herd monthly monitoring. Research supports that early detection and treatment of HYK is key to controlling the negative impacts. Milk and data-based prediction tools like the one developed by our team play an important role in monitoring monthly HYK prevalence.

Now that the tools have been implemented for several years, they also give us the opportunity to look at the big picture regarding risk factors for, and the impact of, HYK on our herds. These analyses support previous findings from research studies, such as association with more displaced abomasums and higher somatic cell counts. The research also highlights novel insights such as associations with differential somatic cell count and shifts in types of fatty acids comprising milk fat.

Perhaps the most compelling finding is the decline in predicted hyperketonemia prevalence across increasing milk yield quartiles. This encourages us that you can manage for favorable metabolic health and high production at the same time.