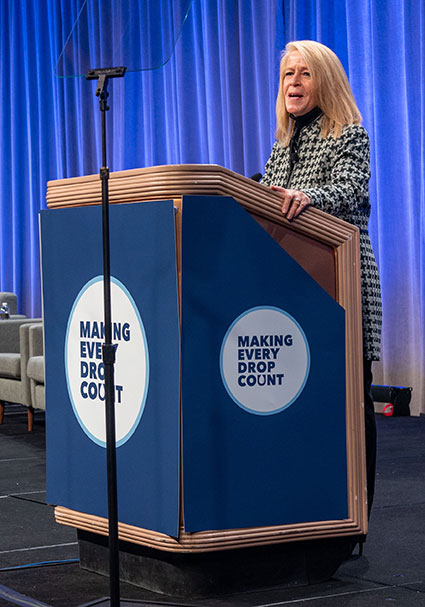 Barbara O'Brien
Dairy Management Inc. (DMI) CEO Barb O’Brien shared her vision for building on the checkoff’s success and momentum of the last three decades and creating a “next generation” program to help assure a prosperous future for dairy farmers and importers.

“After more than 20 years of working for dairy farmers, taking on the role of CEO of the national dairy checkoff is truly the high point of my career,” O’Brien said. “It’s an honor to serve in this capacity.

Marilyn Hershey, a Pennsylvania farmer and DMI chair, added: “Tom has provided such a vision and a strategy and built a foundation for us. I know as Barb takes the reins and leads DMI, she will continue to build on that and move us forward. We’re very excited about the future.”

O’Brien said she has worked in every aspect of checkoff strategy during her 20 years with DMI and has built many relationships with farmers, partners and customers across the value chain. She spent the first six weeks in her new role speaking with as many of them as possible.

“The goal was to hear diverse perspectives on the state of the industry, to understand concerns, and to generate ideas to consider as we build the next chapter of the checkoff’s history,” she said. “While the dairy checkoff has achieved strong results over many years, we are operating in an increasingly complex and dynamic global marketplace that requires new solutions, and hard choices to be made on how to most effectively and efficiently invest on farmers’ behalf.”

O’Brien laid out her strategy that focuses on three areas:

Collective Approach and Impact – O’Brien emphasized the checkoff’s strength is rooted in the enterprise of companies it created, including the U.S. Dairy Export Council, Innovation Center for U.S. Dairy, Newtrient and GENYOUth. “While each company has its own mission, the whole is greater not just in the sum of the parts, but in their interaction,” she said. “We want to drive greater synergies and to bring clarity to the work that each entity is uniquely qualified to lead, maximizing efficiencies so there are more working dollars for in-market use.”

Transparency and Accountability – O’Brien stressed this is a priority and a reason why she embarked on a listening tour “to understand farmers’ perspectives on the business and to assure understanding of my results-oriented accountability and bias for action.” She said a team will review programs, structures and expenditures to ensure results, greater efficiency and support a higher level of transparency and consistency in reporting progress and impact.

People and Purpose – developing future-ready talent across the checkoff organizations is O’Brien’s final priority. She explained how ongoing staff development and recruitment can help assure a talented employee base with skill sets essential for future success. “We want our aces in the right places and a commitment to leverage talent where talent resides,” O’Brien said.

A final aspect – the checkoff’s “dairy transformation” work – kicks in during the fourth year.

“We have an eye toward the future and assuring we have a pulse on what’s to come and that we can continue our vision,” Engelmann said.

He mentioned successes such as helping Domino’s put an emphasis on cheese to become the world’s No. 1 pizza company and new launches, such as the chain’s cheese dips. He spoke about the checkoff supporting McDonald’s in a relaunch of its McCafé beverage line and shifting from margarine to butter. Other successes include the launch of Pizza Hut’s Detroit Style Pizza, which features 50 percent more cheese than a similar rectangular pizza on the chain’s menu. Finally, he credited the work of checkoff scientists, such as those at Taco Bell who helped the chain unveil beverages including the Mountain Dew Baja Blast Colada Freeze. The drink contains a shelf-stable creamer, which was developed by a checkoff scientist.

Ziemnisky said the domestic partnership blueprint is taking hold overseas and U.S. dairy sales are growing as a result. For example, Pizza Hut Asia-Pacific has grown U.S. cheese volume by 136 percent since the beginning of the partnership in 2016.

“We partner with people who can drive category growth,” he said. “This wouldn’t get done without the investment of the checkoff’s innovation team, marketing team and onsite scientists.

“Our partners also share the values farmers have and they celebrate you.”

Gallagher joined the meeting via a video connection and began by acknowledging the farmers he has worked for since DMI was created in 1991.

“I want to thank each and every dairy farmer,” he said. “You really do a great job of feeding the world. You do a great job of working hard and dealing with tremendous amounts of stress, economic frustration and you’ve supported me through difficult times. It’s been an honor working for you.”

Gallagher shared highlights of his tenure, including the continued rise of per capita consumption that has come amid increased milk production. USDA recently reported its per capita figure reached 655 pounds in 2020.

“The checkoff’s role is to sell dairy products,” he said. “Around 1983, when the government was sitting on about 17 million pounds of cheese powder and butter, the farmers said if we can have a voice in the marketplace, we can clear that. Sales have been exactly what the mission is and exactly what we accomplished.”

O’Brien understands she is inheriting a strong foundation, but she is determined to make headway in more areas that are important to checkoff funders. She concluded by sharing a response she gave to a question recently asked by a DMI staff member about her “North Star.”

“For me, that answer is clear: it’s about the unique role checkoff plays as we reassert dairy, not just as essential, but as the superior solution for the health of people, communities, animals and the planet,” O’Brien said. “That North Star is fueled by a passion to support dairy farmers and the work you do every day to feed people.

“As a staff, we share that purpose and will work together to build the next chapter of the checkoff that can proactively and proudly reassert the unique role that dairy plays in so many lives and communities around the world. The U.S. dairy industry is united behind a common goal: ensuring dairy’s rightful place in homes and communities around the world. Together, we’ll shape the future of dairy research and promotion while continuing to deliver the results today.”

For more information about the dairy checkoff, visit www.dairy.org.