PRIOR TO THIS THREE-MONTH RUN for butterfat, protein pay prices led the way in milk checks from September 2019 through December 2021. Before that time horizon, butterfat had a 48-month stretch dating back to 2016 when this milk component outperformed protein.

CLASS IV’S APRIL-TO-DECEMBER BUNDLE remained near $25 at the close of April 11 trading on the CME. This value also remained well over the $21.30 per cwt. figure posted in the beginning of January.

AFTER POSTING GAINS OF 4.1% TO 5.1% in biweekly trading from January 18 to March 1, New Zealand’s Global Dairy Trade essentially slid sideways during its next two trading events with the bundle of its dairy products falling 0.9% and 1% in the next two sessions.

WILL DAIRY DEMAND HOLD? “The latest reports on retail sales at the dairy case are not a dire warning,” said the University of Wisconsin’s Mark Stephenson. “But last month, consumers spent a bit over 3% more on dairy products than they did at the same time last year (good news).”

“HOWEVER, CONSUMERS BOUGHT 3% LESS PRODUCT volume (not good news),” continued the dairy economist. “The difference between expenditures and quantity was the price inflation at the dairy case, and consumers seem to be rebalancing their purchases,” said Stephenson.

THERE MAY BE LESS NITROGEN-HUNGRY CORN planted this year. USDA’s Prospective Planting report predicted U.S. farmers will plant 89.5 million acres of corn, down from 93.4 million in 2021. Most of those acres could go to soybeans, with projections shifting from 2021’s 87.2 to 91 million acres. Corn acres could be down due to expensive natural gas needed to make fertilizer. Both are in short supply due to the war. 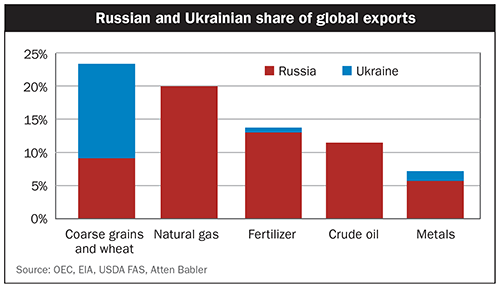