Spring harvest may account for as much as half of the total forage crop yield fed to lactating dairy cows. The latest results of Northern New York Agricultural Development Program (NNYADP) research evaluating opportunities to increase the value of alfalfa-grass forage crops have been presented to farmers, crop consultants, dairy nutritionists, and extension educators in New York, Wisconsin, Utah, and Mid-Atlantic states. The final report for the 2021 project is posted at https://www.nnyagdev.org.

"Adding as little as five percent grass in an alfalfa-grass seeding will significantly increase the fiber digestibility of that forage mix compared to an all-alfalfa crop, and a one percent unit increase in fiber digestibility can bring from 0.5 to more than one pound of milk production per cow per day," says NNYADP alfalfa-grass project leader Debbie J.R. Cherney, a Cornell University Animal Science professor.

More than two dozen farms in northern New York have participated with Cherney's field trials. One of those farms is Michael Kiechle's Garden of Eden Farm in Philadelphia, New York. After poor growing years in 2019 and 2020, Kiechle had used up all his reserve forage. So, he decided to add fescue, a perennial grass, to his alfalfa-timothy-red clover cropping plan and made room for the NNYADP research trial of nine meadow fescue and one tall fescue variety planted with alfalfa.

"This research perfectly dovetailed with changing my cropping plan to add fescue to see if that change would help," Kiechle explains. It did. The four-cut harvest of the alfalfa-grasses mix in 2021 built his forage stockpile back to the point that in June of 2022 he still had bags remaining. 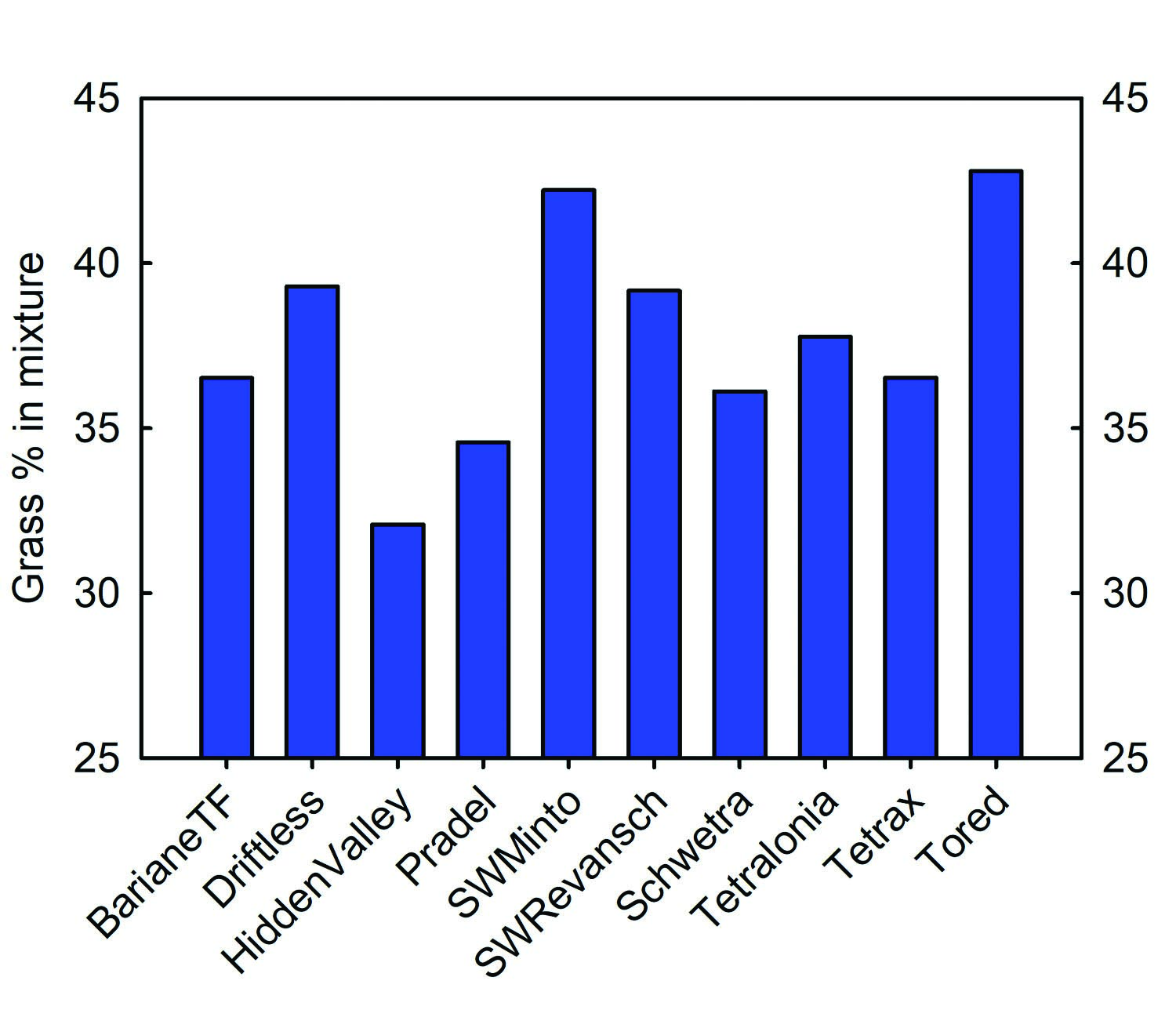 For 2022, Kiechle has planted an entirely alfalfa-fescue mix.

The 2021 NNYADP trial data showed that weather plays a crucial role for establishing grasses in a mix with alfalfa, with the potential to either produce no grass or a high percentage of grass in the mix.

"The grasses at Kiechle's farm all established successfully with the alfalfa. The data collected have produced seeing guidelines to help growers avoid the too-much grass extreme," Cherney notes.

"Since the consequence of too much grass in the mix is greater than the consequence of having a mostly pure alfalfa stand for harvest as lactating dairy feed, the meadow fescue grass seeding rate in an alfalfa-grass mix should not exceed 1 lb. per acre," Cherney explains.

The seeding rate of 1 lb. of grass seed per acre in the 2021 trial produced 30-plus percent of grass in the mix. Cherney's optimal percentage for an alfalfa-grass mixture is 20-30 percent of a high quality grass.

"If the grass percentage is less than 50 percent of the mix, the crude protein content of the mix is going to be sufficient for lactating dairy cows," Cherney points out.

Data gathered over the course of the NNYADP alfalfa-grass research trials since 2013 has produced insight into the combined crop's fertility requirements, fiber content, fiber digestibility, and lignin value.

This NNYADP research has also included the first trials in North America of one Wisconsin-bred and several European-bred meadow fescue perennial grass varieties.