The author is a University of New Hampshire extension professor/specialist emeritus and an independent dairy consultant in Boscawen, N.H. 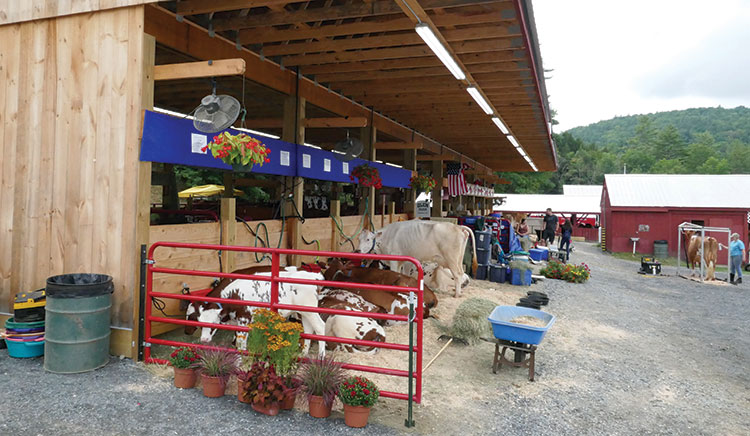 The double cantilevered truss roof covers the outside row of cattle and eliminates the external support posts. The gates at the end of each row separated the cattle from the fairgoers and made a flexible barrier that could be swung back for cleaning.

A lot of fairs are still using post-World War II dairy cattle barns built with old telephone poles, rough lumber rafters, and corrugated metal roofing. They have served well over the years, but some of these structures are tired and lack modern conveniences.

This was the case for the Cornish Fair located in Cornish, N.H., along the Connecticut River Valley. Tents were often erected to create additional housing, but there were drainage issues and crowded conditions within this temporary housing. 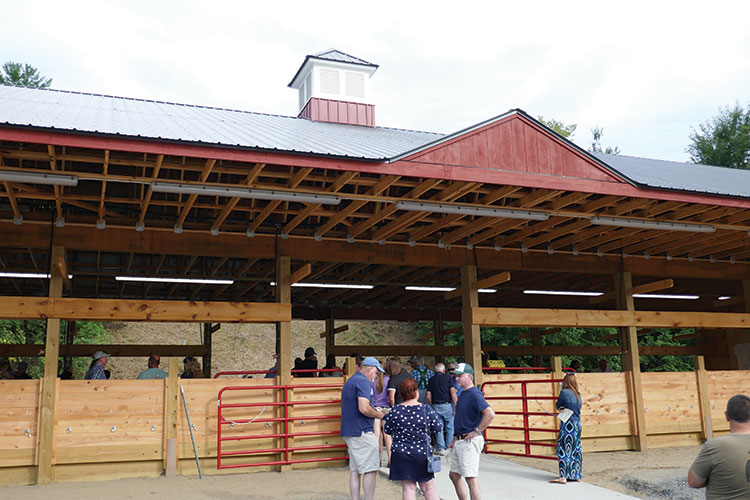 The center of the dairy barn has an operating cupola for ventilation, a crossover alley, and a roof dormer to divert rainwater away from the entrance.
Two years ago, there was a glimmer of hope for improving these conditions. A businessman in an adjoining town offered to match funds raised to build a new facility and upgrade the electrical service in the animal areas. Soon rumors of this opportunity spread through the community of Cornish, and people offered to pitch in. A planning group came together consisting of fair board members, animal exhibitors, and cooperative extension staff. 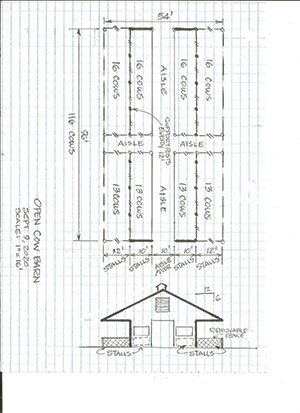 A plan was drawn up for the Cornish Fair dairy barn, which would keep all of the posts internal and within walls so there would be no obstructions for cleaning and easy viewing by fairgoers.
The first step was to draw up floor plan options to enable the group to share their vision with potential donors. After several renditions, an acceptable layout was designed, which was a pole barn that could house 116 animals.

This concept was taken to a licensed engineer. The barn had a double cantilevered roof, meaning the roof projected out 12 feet on both sides with no external posts so there would be no obstructions for cleaning. The barn had two 12-foot outside rows of cattle and an open 30-foot-wide center with a row of cattle on each side of a concrete walk alley.

As people saw the plans, the funds started to pour in, and thoughts of potential uses expanded beyond the fair to other community activities such as antique shows, yard sales, and youth hockey games. Nearly $200,000 was raised in cash contributions and generous in-kind donations from the contractors.

In the spring, one of the old original barns was torn down during a community workday with a commitment to have the new barn in place for the fair held in August.

There were several unique features to this barn to ensure its structural integrity and to serve the needs of exhibitors:

• A continuous footing was poured down the length of both sides of the barn for supporting the posts.

• Pressure-treated posts made of laminated 6-inch by 12-inch stock were buried 5 feet into the ground on top of the footing and had anchor beams nailed to the bottoms to prevent lift.

• Stub posts in between the support posts served as anchors for the cattle divider partition and were covered with plastic collars to reduce degradation from the soil contact.

• The center walkway and cross-over alley were poured concrete and the stall bases were gravel.

• The cow dividers were 2-inch by 8-inch planks slid into cleats on the posts so they could be removed. Ring bolts were installed about 2 foot on center for tying cows and calves.

• Electrical lines were run in conduit above the cattle dividers, and double outlet boxes were mounted on the support posts. 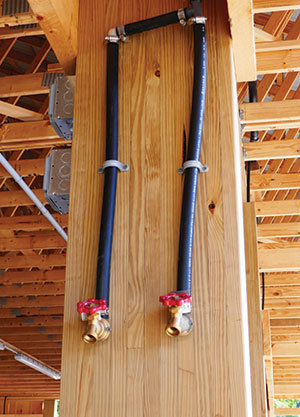 The water and electrical were run up above the animals and the outlets and faucets were dropped down.
• Drainable water lines were run along the truss chord and lines dropped with shutoffs on each support post.

• Horizontal cross pieces were mounted high up on the support posts with a dedicated outlet for mounting fans.

• A wash rack with a channel drain was constructed outside at each end of the barn.

• Three rows of LED lighting were mounted to the bottom of the truss chord with several banks of switches for varying the light intensity.

• The sidewalls were 13-feet tall at the eaves for good cross ventilation.

• An operating cupola was mounted on the roof over the center cross-over alley.

• The sidewalls and end doors were left open with large air vents in each peak.

The pavilion was dedicated a week before the fair, and there were over 100 people in attendance. It was introduced as the Fred and Shirley Sullivan Barn, named after a local farm couple who has done a lot for the fair and the community.

There were many positive comments after the first season of use during the fair last August. The two most common critiques, which will need to be addressed for the next fair season, were the hot afternoon sun on the west side of the building shining on the animals and the need for more adjustments in the fan mounts.

The barn was completed on time and served its first purpose well. Now people are getting excited about some of the other alternative uses for the barn in the off-season. 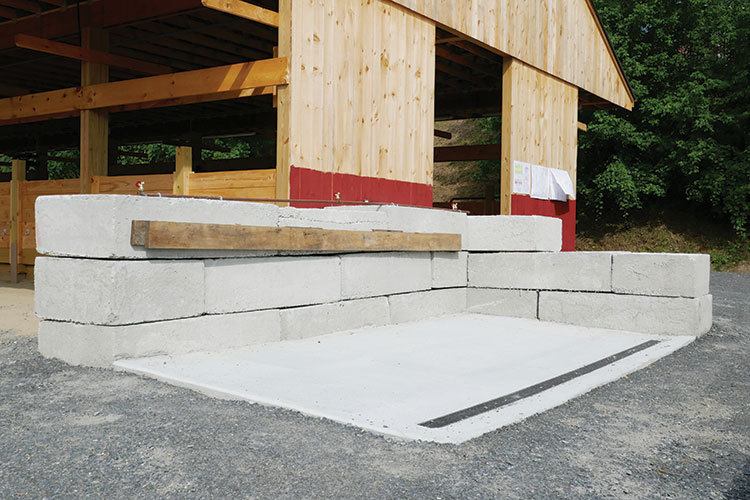 A wash rack on each end of the dairy barn consisted of block walls, a one slope floor, and a commercial channel drain. 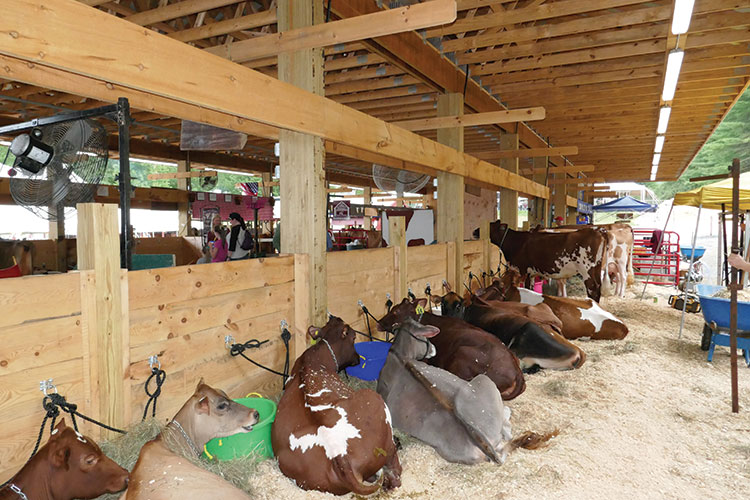 The cow dividers are plank dropped between two cleats with ring bolts for tying the animals so these could be removed to open more space in the building for other uses. 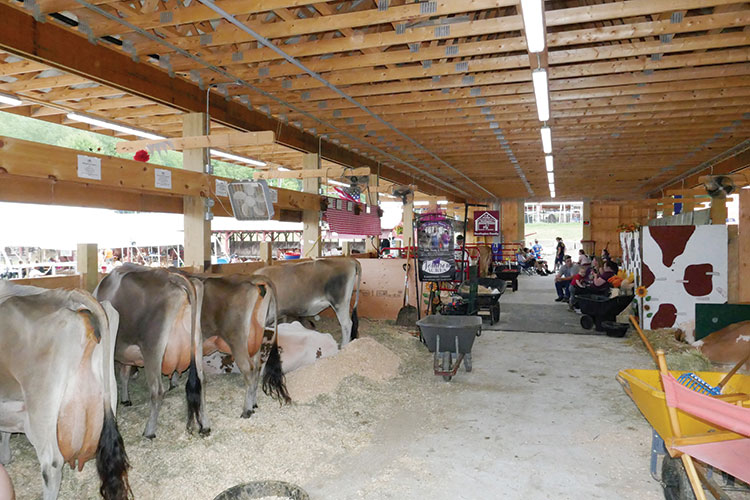 The center alley of the barn is 96 feet long.
Related

Don’t let injuries get you down
By John C. Porter 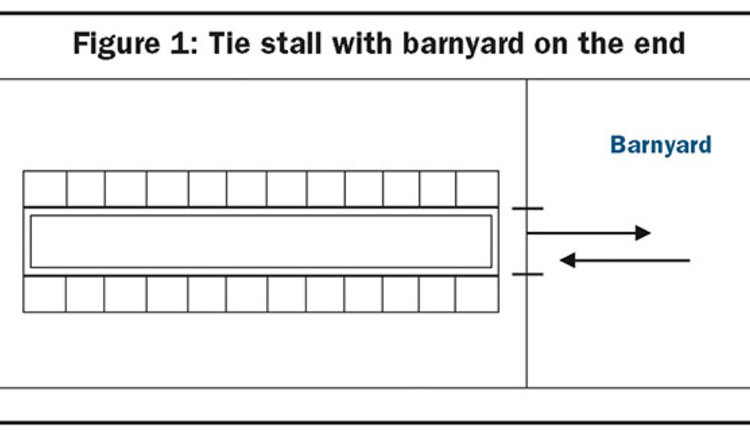