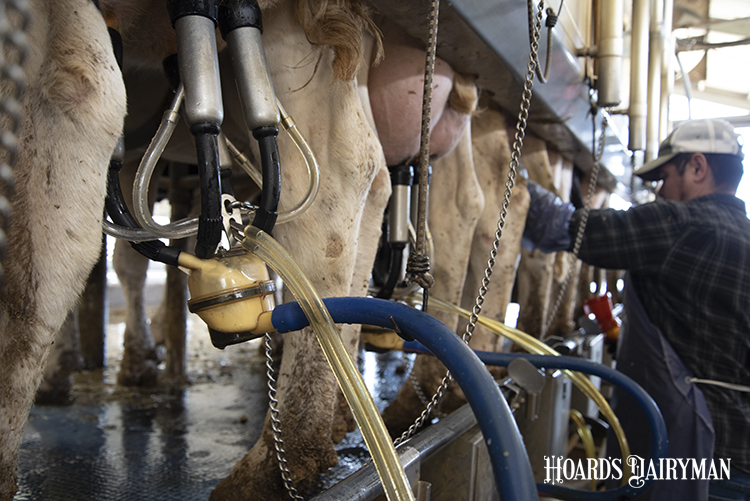 The milking procedure is the final step in the long line of tasks and processes dairy farmers take to have a safe, nutritious product to provide consumers, so doing it well is critical to ensure cows remain healthy and productive in the process. During a World Dairy Expo Seminar last week, Paul Virkler from Cornell Quality Milk Production Services described that a desirable milking can be defined as milking quickly, gently, and completely.

Milk flow is typically the most obvious indicator if these three standards are being met. If we look at a graph of milk flow over the course of one milking, what we want to see is a rapid, uninterrupted rise to peak milk and then a rapid fall at the end, said the extension veterinarian. That’s possible when milk is easily harvested from both places stored in the udder — the gland cistern, which provides the immediate milk flow when the teat canal is opened, and the alveoli, which stores 80% of the milk further up in the udder.

“What we want is the stimulation to make these two overlap,” Virkler explained. He reminded attendees that milk ejection is an inborn reflex; it is not under the cow’s control. That’s why the stimulation is necessary.

When stimulation is poor, the milk flow graph changes to reflect two peaks instead of one. This is referred to as bimodal milking or delayed milk ejection. The glandular milk is ejected after attachment of the milking unit, but there is a delay before the alveolar milk is stimulated to be released. Virkler noted that this is a problem you can see, as milk flow in the claw will stop and cows will step around or kick the milker off. It’s often not just a problem of individual cows, he continued. The trend can be seen in the whole herd.

These kickoffs, reattachments, and liner slips cause additional unit on-time and can prevent cows from milking out completely, Virkler explained. This means cows are spending more time in the parlor while possibly giving less milk.

Poor milk flow also means the vacuum must climb, and it then stays high, elevating the risk of teat damage, cow pain, and mastitis. In a study his group did, when cows left the parlor with teat edema, it took longer for their teat canals to close. Some cows’ teat canals were even still open at the next milking eight hours later.

The reasons cows fail to let down their milk are well known, and they all come back to a lack or inhibition of oxytocin. Virkler stressed that an effective milking routine that includes proper stimulation is vital to milk cows out well. While recognizing that each farm will discover what works best for it, he advised all farmers to check that their routine, on average, reaches the following times:

• At least five to 10 seconds of initial stimulation time

If two-minute milk numbers, cow behavior, or the milking routine indicates that your cows are not achieving the rapid rise and then fall of efficient — quick, gentle, complete — milking, review your procedure so that all of the steps your farm takes to raise healthy, productive cows are not wasted right at the finish line.